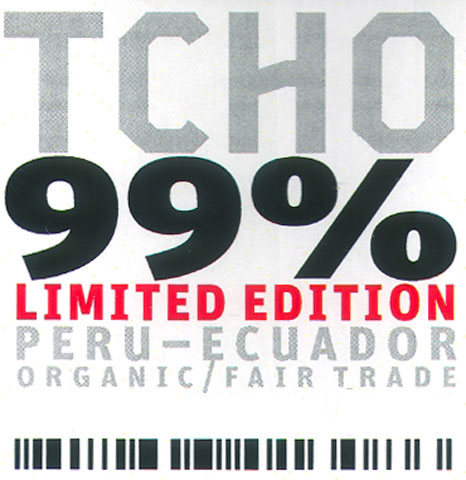 Impact
By now many know that Tcho stands for Tech Chocolate, launched by a former NASA engineer, subsequently grounded & fired from his post by the company. Such a chocolate life in the biz where many are all smiles in public & cut-throat in private.

Keeping it positive & staying aloft though... 99% in the G-forces of the chocolate world ain't no cakewalk & Tcho, true to character & undaunted, attempts a spacewalk, hanging out there very precariously, tethered only by 1% of phantom non-cocoa content (a safety measure to account for equipment that may have had an infinitesimal speck of sugar or vanilla or whatever could've been in the pipes prior to scrubbing them clean). Consider it a psychological umbilical cable without which this bar might just automatically tumble, roll, barrel & crash back down to Earth rather than melt effortlessly away into the zero-gravity of the firmament.

Tcho 99% -- an unsweetened solid-state Nutella for the astronaut in everybody.
Appearance   3.8 / 5

Aroma   6.6 / 10
somewhat flattened as after a splashdown: beached coconut shells & vinyl washed ashore in a sleeve of some leather -> fetid decomposition... the GPGP (Great Pacific Garbage Patch) from the Northern Gyre between China & the USA floating southward??) -> Ecuador peanut & ishpingo (tell-tale CCN-51) -> eventuates cocoa + Amazon grape (Pourouma cecropiaefolia )
Mouthfeel   14.2 / 15
Flavor   45 / 50
slow starter... butter -> wooden cocoa (oncidium sharry)... & liftoff on light cashews -> darken some to brazil & peanuts -> lonely violet dot among the receding dirt of the forest floor, blossoms into a planet of the (Amazon) grapes -> plunges into deep coffee space -> chalk dust like so many obscure stars -> drifts back to nuts, then safely ensconced in a cocoa-leathered capsule
Quality   17.3 / 20
Somewhat free of character (could it be CCN-51 from both sides of the Peruvian / Ecuadorian border?) but considerable nonetheless (should dispel any doubts of no Nacional whatsoever).

The shadow of that other 99% -- Cluizel's -- hangs over this (or for chocophiliacs who nab their wares at airport kiosks, Lindt's Noirissime --'ist tres delightful, si?'). It sorta falls in between them. Neither the fussy polish of the French nor the über Swiss process. A very pragmatic down-to-Earth approach instead, without any added butter.

These beans themselves possess higher fat content (a godsend at this punishing percentage) evidenced by the overall containment of flavor & even stupor of it (very substrate bitterness & near-zero astringency, the latter also points to sound post-harvest technique). Brad Kintzer at the controls for Tcho then applies a fine grind to cinch the Taste & Texture.

Tcho's most daring to date.