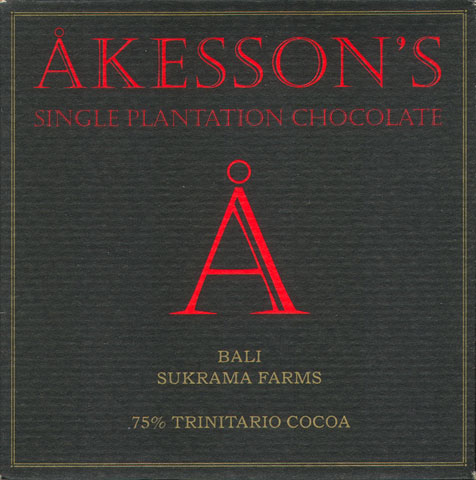 Not be confused with that other BS... the chocolate Beyond Sublime from Jembrana but the initials of this Bali Sukrama bar to elicit terima kasih, meaning 'thanks / gratitude', Bali Style.

Cacáo from this island wears no sexy genes compared to hotspots Beniano, Venzy, or Marañón. Just a promiscuous slut here.

And one tasteful reminder that cross-pollination is the way of cacáo; leading many in the chocolate wards to think If nature abhors an inbred, she adores a hybrid.
Appearance   3.7 / 5

Aroma   9.1 / 10
an exotically intoxicating all-4-1 & 1-4-all jelly jam (the apricot-like loquat / bignay berry / monk fruit [luo han guo]) spiced by clove / perilla (think cinnamon meets anise meets vanilla) & sweetened in coconut palm sugar -> charcoal + betel in the base; could be a sticky one
Mouthfeel   12.3 / 15
Flavor   45.8 / 50
raisin stuck in chocolate -> unexpected custard pudding -> roasted cashew -> palm sugar the sweetener to papaya -> shifts up in acidity to mango, then loquat -> sours some on Gmelina arborea tree fruit, bamboo & tamarind -> lemon grass + a nut re-emergence, this time around chestnut & brazil nut -> Oreo™ sandwich + akebia (the 5-leaf "chocolate vine")
Quality   17.6 / 20
What starts out rather Caribbean in the mold of Valrhona (gooey raisin glop) re-orients to Oceania & trues itself by the end.

The Sukrama Bros cultivate cacáo on the western edge of the island. There Bertil Åkesson enlists the aid of Ben Ripple (Big Tree Estate) & Frederick Schilling (ex-Dagoba / current Amma) for grain selection & centralized fermentation. Together they perform some assiduous due diligence.

Despite the warning on the label of "masculine bitterness", very little comes on strong. Sure, there's a scrape of wood but most of it sublimates into nuts.

Quite complete: decent range, depth (especially at the front), symmetry, cohesion &, although it tires somewhat, it never quits or runs flat as Jembrana, so count stamina as another of its fine attributes.

Nothing mind-blowing or taste buds ripping. Just solid quality thru & thru.