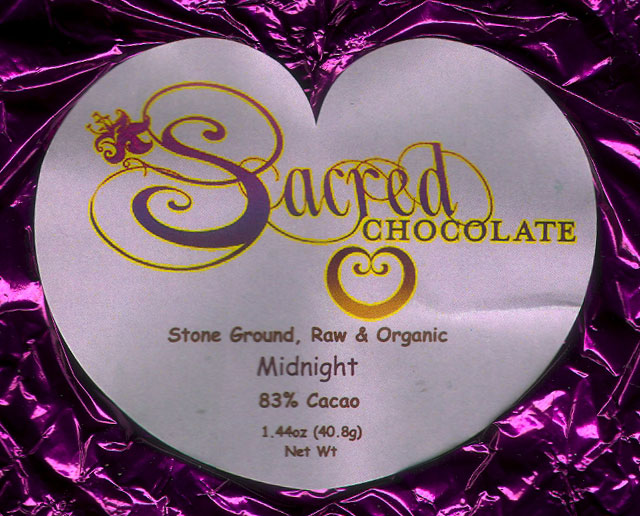 Impact
What is it about chocolate & midnight?

Might Sacred, by solemn creed, be awakened to the revelation that chocolate is about illuminating the darkness rather than irretrievably sinking into the abyss? That from the cacáo woods which are another world, as novelist VS Naipaul reminds, woods of fairy tales… dark, mysterious, shadowed & cool... chocolate emerges into the light -- Christ-like -- by the grace of sugared sweetness?

Holy Cacáo... probably not, but let's give the disciples at Sacred the benefit of the doubt which could explain how this bar shines thru the amber halo of maple sugar.

Though this bar lies far from fields of dreams beneath the sun at high noon, it nonetheless reflects the transmutation of lead-into-gold / bean-into-chocolate, & the penumbra aspect of Jungian alchemy.
Appearance   4.2 / 5

Aroma   8 / 10
sappy as grandma's stale cupboard: leftover maple syrup, oat crumbs, sticky molasses on the shelves, licorice... other than the cobwebs, rather inviting actually
Mouthfeel   13.2 / 15
Flavor   41.4 / 50
good chocolate front backed in maple -> vanilla, hard on its heels, slows but fails to prevent disintegration into random bitters, dirt, & tar -> re-emerges out of the coffee grounds for coffee berries (quite nice) -> stringent finish -> deep mocha-latte post-length
Quality   16.1 / 20
A demo on the felicitous effect of maple sugaring upon unroasted cocoa. A wise choice for an 83%, since maple adds extra color than pure white cane & covers for a lot of "raw chocolate" deficiencies to create that snapping coffee-cup-in-a-bar sensation.

Clearly refined, judging by Texture; & cooked to some degree in the process based on the opening sequence of respectable chocolate flavor (though vanilla aids in that perception).

Among the tops in its category of a high-percentage "raw".