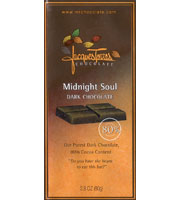 Impact
“Do you have the beans to eat this bar?”, asks Jacques Torres. And 1 or 2 little beans is all it takes because this empty Jacques-strap has no balls... nada cajones... pas de couilles... ever since it was emasculated by the “Dutch” master of cocoa makers. Capisce?
Appearance   3.2 / 5

Aroma   6.9 / 10
color gives it away: Dutched vinyl, leather, & tobacco under a gaseous roast; uncomplicated
Mouthfeel   10.1 / 15
Flavor   29.3 / 50
baseline cocoa runs toward coconut -> peanut undertone -> vanilla soy -> a micro-suggest of cinnamon -> burnt brownie shadow at the back
Quality   8.7 / 20
Bulk-in / bulk-out so the masses can bulk-up. Always playing / tweaking his formulations, Torres’ bars come on & off line faster than auto-plants discontinue car models on the assembly line so by the time you read this, it too will probably be discontinued. If this were all part of perfecting the craft, it’d be praise-worthy. Instead, it’s done to create marketing buzz as the ‘new & improved’.

This Midnight Soul sorta replaces the innocuous Dangerously Dark 84% - a distinction without a difference really - as both have been lightly Dutched with alkalis, stripped & eviscerated of any challenge whatsoever, then thoroughly scorched into LCD material, a pumped-up 80% saddled in an obese CBS (Cocoa – Butter – Sugar) frame.

In other words, a scrub.