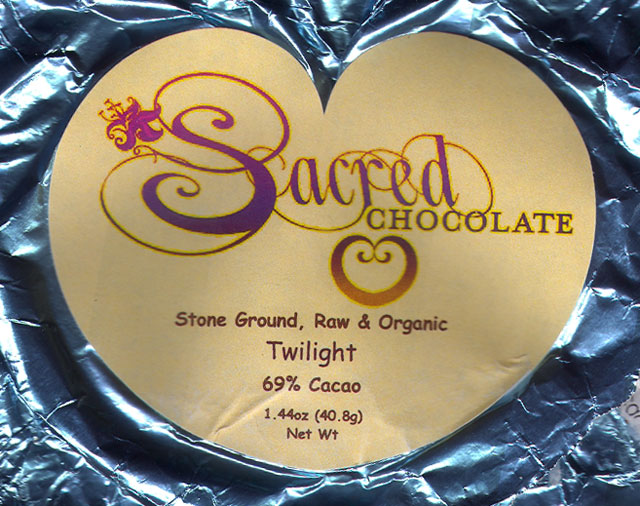 Impact
A secular keeping of the hours by, ironically, Sacred Chocolate. The company divides the daily round normally reserved for prayers known as the Divine Office into more mundane clockwork. So instead of matins & lauds all the way thru to compline, this synod to "raw chocolate" substitutes the White Passion of dawn, Midnight & the Heart of Cacao's total darkness.

Each, presumably, consumed by some form of chocolate meditation, a rite first sanctified by interfaith high priestess Rev. Ron DMC (for Doctor of Meditational Chocolate).

Twilight then corresponds in particular to the liturgical equivalent of vespers.

If religion is superstition compared to science's empiricism, this "raw bar" revives chocolate's pagan past.

The flock will have difficulty, however, centering the mind & focusing on their (ultimately bad) breath for Twilight descends into the Great Pit of Carkoon -- that giant black hole of flavor inside of which a ravenous monster once ate Boba Fett in the Star Wars series of new myths for the New Age: “In its belly,” quoth C-3PO, “you will find a new definition of pain & suffering as you are slowly digested over a thousand years.”
Appearance   4 / 5

Aroma   6.9 / 10
hardened maple syrup scrapped up from granny's cupboard shelves including, but not limited to, the varnish on them, the paint & primer beneath, plus some wood too
Mouthfeel   9.3 / 15
Flavor   29.6 / 50
maple candy -> talc & caulk for the longest -> cocoa stripped by astringency -> acetate -> char wood (unroasted?) -> terminal cement the after-taste
Quality   5.8 / 20
Just when "raw chocolate" is starting to emerge from the Middle Ages, this comes around to lead it into the pre-historic era & re-cement -- literally -- raw's reputation.

Holds none of the promise of its big sib, strange because that weighs in at 83% & expectations are that this at a theoretically sweeter 69% would be more palatable.

Did the labels for these 2 bars get swapped out for one another back at Sacred's holy offices?

Whatever the circumstances, Twilight declares an inquisition against tongues everywhere. Lives up to Hobbes' dictum in The Leviathan: poor, nasty, brutish &, unlike that book, not short.

Abysmal... from the seed selection (completely rank) to the processing.