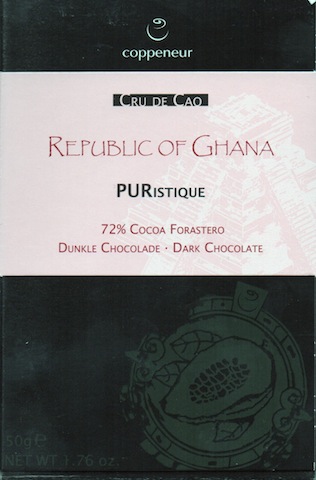 Impact
For an upcoming article in Gastronomica magazine, Dr. Kristy Leissle, directrice of the North West Chocolate Festival who earned her PhD studying the Ghana cocoa sector, cites the C-spot™ Chocolate Census -- which houses the most ratings & reviews, online or offline, for premium bars -- as a resource. (As does Dr. Cristian Melo in his PhD dissertation [from the link scroll down to view his Reality Chocolate]). Her findings: while Madagascar, D.R. & the over-represented Ecuador flood the market with product, artisan barsmiths produce a relative paucity of chocolate made from West African cacáo.

Why is that?, she bemoans.

In the ensuing interview with the C-spot™, the partial explanation (& it is only that, partial) goes like this:

Musical Jesus & chocolate enthusiast John Lennon (late in his life he swapped out LSD for chocolate tabs during recording sessions) famously averred that "woman is the nigger of the world". A free-man practicing free-speech.

He would understand then that West Africa dwells in the cocoa ghetto. Most think of it as just dirty, monochromatic bulk festering in the same 'hood along with graft & corruption, malfeasance & malgovernance, Bono-levels of extreme poverty, Clooney-worthy civil strife, & more diseases than all the donated malarial nets & HIV meds can handle.

Truth be told, when it comes to chocolate, the flavor derived from Amelonado-type cacáo -- which West Africa built its foundation upon -- is still a baseline reference for classic Earth chocolate. Solid to the core, thru & thru, streaming nothing but the world's fav-flav without any interference (or 'nuance' as the chocoscenti say) of other taste notes.

Trouble is, it's beginning to disappear as the candy giants sprinkle millions of clones all over the countryside that promise higher yields, disease resistance & drought tolerance. Flavor, if any, in those clones becomes a mere afterthought.

This bar perpetuates some of those myths as it dispels a few others in highlighting the predicament. 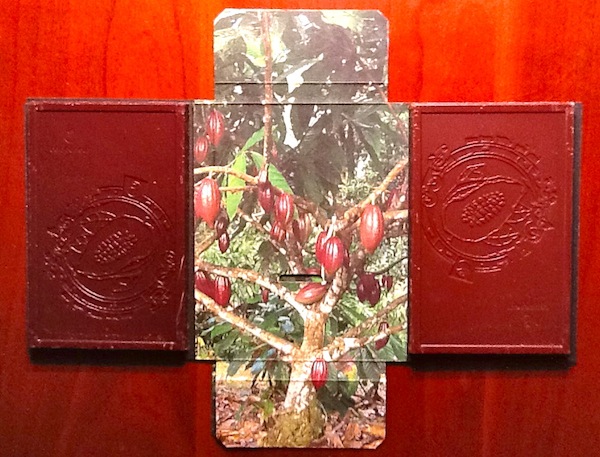 The Cruciform of Cacáo: Ghana Chocolate Nailed to the Woods
Appearance   4.8 / 5

Added cocoa butter deployed to control the harsher, aggressive nature of West African cacáo which it accomplishes with some polish (only mild bitterness & that mostly from the charred edges of some fractional burning which develops that scar-tissue tasting of an Oreo™). In the process it weakens & dilutes the strength of this genotype & robs it of some depth, acutely critical for a rather limited Flavor Profile to begin with.

In contrast, a great West Afric bludgeons the mouth & then slams a 2x4 to the 3rd eye. While nothing objectionable, this lays off some, dons the kid gloves, pulls some punches, & coddles the taste-buds.

A safe veneer-ial chocolate (oh c'mon, man, stop thinkin' 'venereal'). And too plain anyways to turn prejudices around. Many venomous snobs will continue to spew & snigger at the very notion of premium chocolate out of West Africa.

Sometimes deep-seated biases are about as hard to shake as addictive habits because they might be true in the one instance & good in the other.

But this is the the kind of stuff Lennon & Christ would embrace with empathy, for eating chocolate cake in the bath if nothing else, while recording a re-mix on the Ballad of John & Yoko. THINK... ya don't take nothing with ya but your soul.

And this still got some.