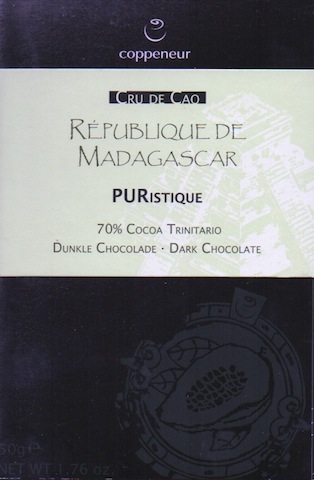 Impact
Coppeneur, a German company, chooses the French appellation for the "red island" in so naming this bar République de Madagascar.

This, then, the Gunter Sachs-meets-Bridgette Bardot bar. She the model-actress from France; he the German sharpshooter who claimed to have never worked a day in his life (chocolateers often talk this way too about their passion).

Gunter demonstrated that flowers won’t automatically win over a women like Bridgette Bardot but thousands of them, released over her home from a helicopter, just might do the trick. 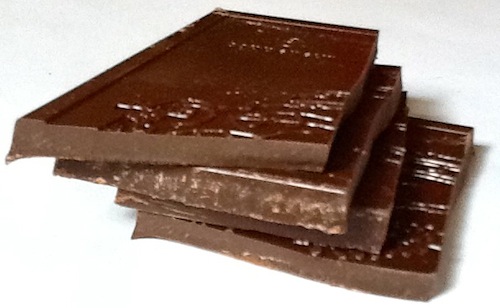 Aroma   8.4 / 10
beguiling: snickers the nose with vanilla bean (none added) & basal cocoa lying as much off the coast of West Africa (São Tomé & Príncipe) than East Africa until... vetiver & a pine resin spring up, then ravensara & cedar wood -> roasted flint at the bottom
Mouthfeel   11.7 / 15
Flavor   46.8 / 50
pine sol ignites a cranberry burst sweetly balanced in vanilla orchids (excellent) -> darker tones still -- vetiver -- overtake the upper notes, pulling them down toward base chocolate -> roasted hazelnuts backed by resurgent acidity (this time lime) -> cream (Criollo heritage?) streams along with loquat to a SweeTart caramel (pretty nice Part II) -> closes on a cedar plank
Quality   17.5 / 20
Far from the most exuberant Madagascar; just well-proportioned complexity between highs & lows.

Very much the successor to Coppeneur's 72% Menavavi. The 2% differential rolls off some bitterness & acidity for a more mainstream Flavor Profile.

More condensed too without eradicating the brightness altogether which Madagascar cacáo usually highlights.

This, alongside Dandelion's Madagascar, exudes some caramel undercurrent, & points to the island's current crop showing a certain boldness. To what degree this stems from the seeds' inherent bio-chemicals versus the manufacturing process is always a parlor game.

Chances are a bit of both. Doubly so considering that the roast reverts back to the label's Pralus protégé days.