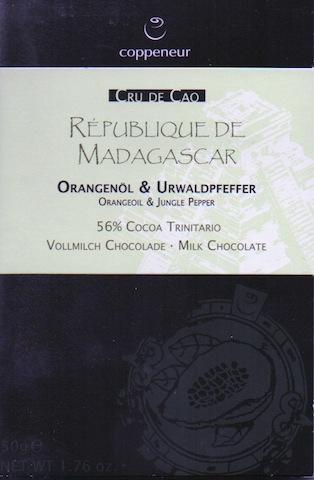 In the headrush into the crazy, modern chocolateers slather their staple on just about anything nowadays, from powdered meat grogs to alcoholic slosh. If smoke is the new bacon & monkey brain the new goat cheese, then beer & wine are so nano-second ago.

And where does that leave the tried & true?

Though most Euros & gringos think pepper & chocolate are neo-extreme, they've been banging together in Meosmaerica since well before Columbus & his band raided their shores.

Coppeneur swaps out the chili pepper of ancient Americans in this bar for white pepper originating in Asia. (Dunno why Germans name it urwald or 'jungle pepper' which urban dwellers more suitably call any kind of dirt, like cockroach droppings, that land on one's dinner plate).

Likewise with orange, which many think is a recent add to chocolate confections. Philippe Sylvestre Dufour published a treatise on chocolate in 1685 based largely on the work of Antonio Colmenero de Ledesma that included recipes containing orange water. Ditto the great epicure Brillat "Tell-me-what-you-eat-&-I'll-tell-you-who-you-are" Savarin almost a century & a half later.

As per Milk Chocolate... well, neither Hershey's kiddies nor the Swiss but the Englishman Sir Hans Sloane receives credit for that when, in 1672, he concocted a medicinal recipe for it.

Sugar then, the ultimate spice from the Indian subcontinent, pulls it all together in this bar from Coppeneur: the sweet, the bitter, the acidic, & the savory. A decidedly East-West combine in a trans-global hook-up.

The first of its kind as far as anyone can tell; never having been blended together before.

And maybe for good reason. 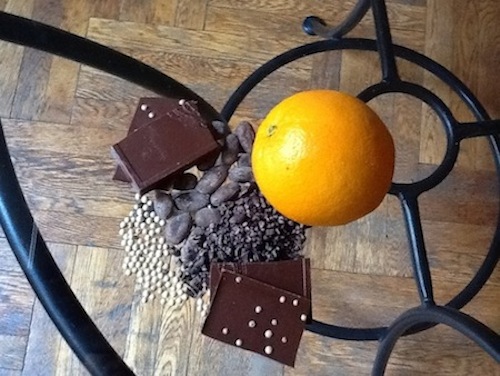 Aroma   7.4 / 10
vibrant agent-orange zest amplifies then just defoliates Madagascan cacáo's innate citrus -> a touch of must / caramel at the bottom
Mouthfeel   11.6 / 15
Flavor   38.2 / 50
sweet orange malt -> Ovaltine® / Bosco® as dairy influences both cocoa & citrus -> darkens considerably to toffee-musk (white pepper making itself well known now) with a heavily-extracted orange essence layered atop -> heat rising from the edges for orange flames... rages out of control, burning the mouth out -> "doused" by Citronella® spray which only adds fuel to the fire whence the structure collapses -> singed afterglow
Quality   13.4 / 20
An ambitious experiment.

A lot of elements; a lot going on. Coppeneur almost pulls it off in a sleight-of-hand flirting with alchemical gold, except the friction proves too combustible. Instead of communicating, it all goes up in flames of combative thermodynamics.

Just as those who live in glass houses shouldn't throw stones, those who play with matches shouldn't light them around flammable substances.

The essential orange oil only minimally tempered by Milk and cocoa butter fats, then re-ignited by pepper corns.

White pepper consists of the seed only, the skin of the black pepper removed in a fermenting process known as retting. It tastes milder this way &, as expected, somewhat musty from the fermentation. But don't let that fool anyone. They can still pack the thermals. Feels hotter than it is. In the process, they along with the orange oil shunt Madagascan cacáo off to a mere sidelight.

A compound that really stresses a particular emphasis of Santayana's reminder that 'those who forget history are condemned to repeat it' (italics added).