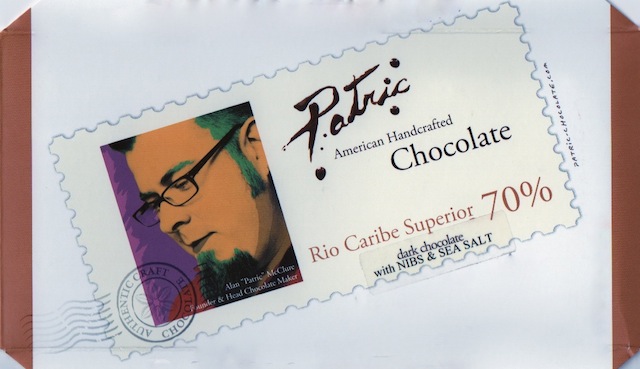 Curious choice, on the face of it, adding Nibs to RIo Caribe.

Well, sometimes ya just gotta have it so ya just do it in order to resolutely prove a point.

Take for instance chocolate businessman John Waterman. During the British blockage of the American colonies prior to the War of Independence, Waterman placed a classified ad in the newspaper that he will "at all times be ready to furnish his customers with CHOCOLATE".

Come hell or high water, revolution & war, there will be chocolate, damn it.

El Presidente Hugo Chavez of Venezuela -- from where this cacáo originates -- wishes to emulate the British Navy by restricting the cacáo trade so he can shape agricultural commodities there to his nationalist ambitions.

Whether sound or not, Patric responds by doubling down in throwing Nibs into this Rio Caribe mix.
Appearance   4.7 / 5

Rio Caribes exported to North America as of late exhibit the shorter end of the ferment cycle (residual ethanol detected at the mid-point). Little in the way of fruited acidity / accents to designate these allotments as shy of superior. Nibs serve to reinforce the profile. Salt then compounds the FXs.

Indeed Patric shakes the salt a bit zealously, though nothing objectionable. It does buttress the progression & provide stamina to the length.

So all good, such as it is, with hi-CQ (for Chocolate Quotient or baseline cocoa flaovr free of much nuance) & a marked improvement over Patric's plain dark Rio Caribe from vintages past.