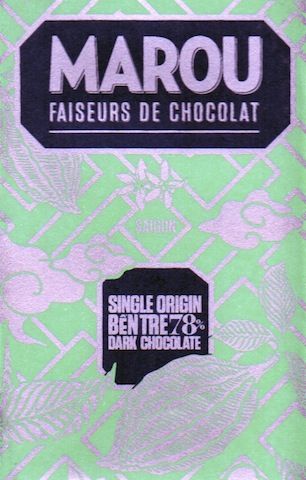 Impact
Some people will walk over burning hot coals to get to a bar of chocolate. But what happens if the Tony Robbins-type life coach at the other end of line explains afterwards that those very same coals are the chocolate bars?

No need for any GPS finder... it means you've been C-spotted in Ben Tre, Vietnam.

Meet Sam & Vincent, 2 guys who took the American dream on the road… overseas. They shelved gigs back in the States for this foreign venture: Marou forms a portemanteau of their last names (Maruta & Mourou).

Together they rep yet another in the burgeoning scene of ethical chocolates. Ya know, certified organic, fair trade, both child-labor & cadmium-free, untested on any animals except for humans. Fact is a lot of these stack up to a shell game, a capital con ($), run by sadistic Fs to the A, with a veneer of altruism to get over, while all the while screwing underlings.

The choc world is especially ripe with “pre-competitive cooperation” where players wear their love & hide their hatred (RE: happy smiley faces in public / cut-throat business behind closed doors). To be expected from Big Candy execs running multi-billion dollar enterprises. But to be so infected at the artisanal end of the spectrum? Well, one barsmith confided in despising chocolate professionals, calling them “scum” (harsh; though this never stops said person from attending every conference & show). Damn, can’t even trust a chocolate bar anymore.

Marou operates in the undergrowth of the candy giants that use Vietnam as a hedge against potential disruption to their primary suppliers of cocoa – West Africa and Indonesia – should either of those collapse under political instability & even global warming (which would dislocate the “20/20 Zone” where currently cacáo only grows). There Marou identifies & scoops up the, presumaby, better seed lots for their boutique line that pays a premium & in turn delivers higher quality produce which, in return, fetches a significiantly higher consumer price.

All’s fair; opportunistic (nothing wrong with that per se) & wise too (Sam & Vincent are informed beyond their experience; quite aware of the pitfalls in the industry & the marketing tendencies that often frame little more than a sham).

This duo puts the lie to so many development models, both as an indictment of them & as a way to justify their own M.O. / status: “At the end of the day certification is by definition a bureaucratic exercise: a) set norms, b) put in place standards to verify the norms are being upheld, c) be able to bury any query under a ton of paper… When dealing with a family on a orchard of just a couple acres, maybe with few hundred cacao trees, some other marketable crops, a pond for raising fish, a pig or two + some chickens running around the vegetable patch, the whole certification regime appears absurd."

As such Sam & Vincent harbor a real appreciation for chocolate culture & their responsibilties towards it. While most barsmiths in the USA or Europe hang upside down in their caves like noctural bats, Vincent & Sam operate in-theater / on-the-ground which presents its own set of challenges, such as maintaining bar temper in tropical climates.

Just shy of 100% vertically integrated (although that could be in the cards), Marou mans the frontier of cacáo development in Vietnam’s emerging economy, working directly with growers / Bromans, providing input on post-harvest methods, then rocking out some craft-bars back at their lab. They dig down into the dirt & yet their hands are clean, leaving behind the muck of certifiers -- the ones who demand thousands of dollars for co-ops & companies to affix their version of the good housekeeping seal-of-approval on products that end up on store shelves. 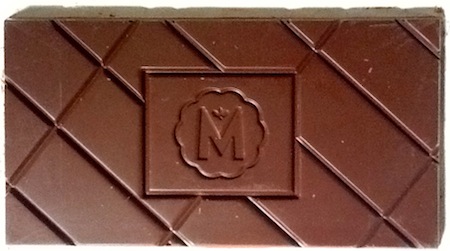 hefty bar feels heavier than its 100 grams; & too the adhesive on the wrapper... a superglue epoxy of dental polygrip strength
Appearance   4.1 / 5

Aroma   6.4 / 10
if this bar were a bank check it'd bounce all over the place: dense cocoa inside rubber latex & coal deposits + some yeast / bacterial funk... Bacillus ssp. for starters feasting on fruits & flowers (durian / akebia [whose pulp = aguava-scented tapioca] + valerian / canaga [the latter with its deep foral note over a bed of cream], add Rafflesia arnoldii – largest flower in the world aka ‘corpse flower’ b/c it smells close to rotting flesh) -> the cinnamon-meets-anise likeness of perilla & the herbaceous-leather behind mugwort
all reminiscent of Scharffen-Berger's Ben Tre aromas, just more pronounced
Mouthfeel   10.8 / 15
Flavor   36.5 / 50
brownie dives straight into a sugared sweet spot (loquat) -> simulates jack fruit -> charred coal bits -> mild fruiting (mango & the aforementioned akebia), the charred ashes + fruit acidity = "ash-cidity" -> coal deepens & develops into a sinking tar pit in the melt thru -> mounting guava stringency -> cocoa butter balms the bitter embers (& any flavor too) for a faint bamboo -> brief & very late stage licorice-tea
Quality   12.7 / 20
A relatively high-percentage bar made all the more tolerable / accessible by a formulation featuring lots of cocoa butter. Nowhere as obscene as Choklat's butter-bars, the oil here accomplishing what the missing vanilla usually does -- cover up & mask flaws in the profile. And this one suffers from a variety of woes: under fermented (stringency) & over-roasted (charring), & neither remedied by a medium conche.

In addition to obscuring many flavor tags (particularly in squashing the fruit potential in the acidity), butter also neuters the character (perhaps its intent). In so doing, it allows the bar to play lighter / sweeter in flavor than 78% would suggest while paradoxically weighing heavier / more ponderous on the palate.

Still, for a fledgling label from a newcomer of a cacáo-producing country, pretty daring.