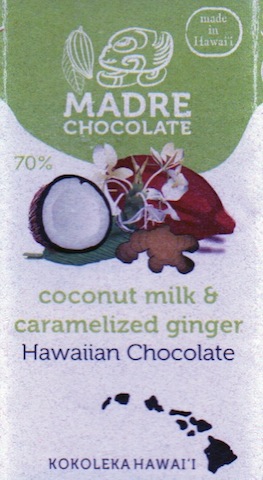 Impact
Nat Bletter of Madre likes to say that Hawaiian chocolate costs so much more because its cacáo seeds are expensive, the land on which they grow is exorbitant, & the island egos are super-sized expansive.

He can be forgiven if his feels a little swollen at the moment with bravado.

In a sign of just how far Madre has traveled in its journey -- from crude batch grinder to accomplished barsmith -- this bar demos that past failures instantiate current success.

A combination flavor that respects the elements.
Appearance   3.4 / 5

The craft here lies in keeping the ratios right (a challenge for Madre in the past) & in non-interfernece -- getting out of the way of the elements.