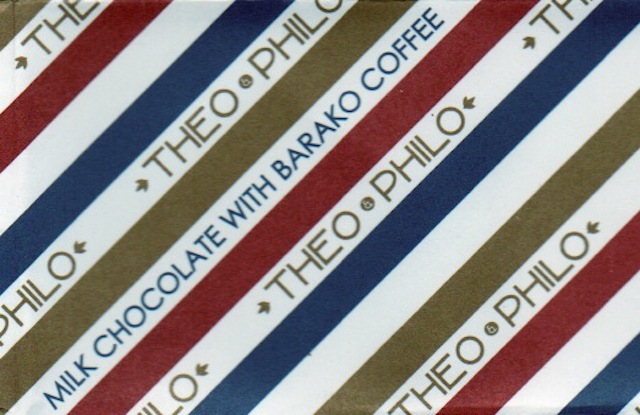 Impact
Barako is Filipino for the male stud of an animal &, by association, the image of a tough guy.

It also refers to the varietal of coffee Coffea liberica grown in The Philippines. Barako trees produce the largest leaves & cherries of all coffee varieties. Its dried beans are identifiable by a pointed tip as opposed to other types that are more rounded in shape.

If Mānoa calls its coffee-cocoa blender the Breakfast Bar, then this deserves the slot of the wake-up alarm. Anyone who sleeps right thru it must already be in that eternal snooze known as death.

Barako Chocolate by Theo & Philo... the Manny Paquiao of bars. It'll knock anyone up except for maybe Floyd Mayweather.
Appearance   4.1 / 5

Aroma   6.9 / 10
"honey, quick, turn off the stove, the coffee's over-boiling"
dregs at the bottom of the pot
Mouthfeel   9.2 / 15
Flavor   41.4 / 50
incredibly straightforward -- strong robusto in the grill, the blows softened by passing florals & fruit... holds this rail to the bottom of the dregs ala its Aroma whence a puff tobacco smoke exhales
Quality   14 / 20
Dichotomies abound in Taste & Texture (tannic flowers / granulated wax).

Almost no finesse on the chocolate making side. The flavor generally crafted in the brweing of the coffee, then carried forward by the fats (both dairy & cocoa butters).

Though it hardly impacts flavor, the comparatively meek Milk Chocolate base influences the outcome by mediating the coffee grounds. Its butters create a longer sustain while soothing an otherwise caffeinated belligerence. Truly an example of slowly letting off some steam so calmer heads prevail.

All of which serves to reinforce that this is less a chocolate than a coffee bar.