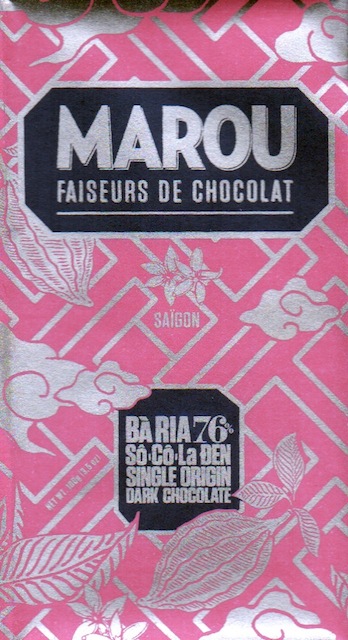 Impact
Bà Rịa ain't no bah humbug. Its coastal beaches make it Vietnam's Riviera. The sort of place tourists flock to, including those looking for a port to transship exotic wildlife to take back home as pets.

Most however can ill-afford the price of, say, a yellow Burmese python let alone the groceries to feed the massive snake its daily diet of prey -- ya know, mammals like cute little house kittens.

Maybe this bar will suffice as a substitute souvenir for them.

Marou certainly tames its ferocity with enough cocoa butter to recall author Robertson Davies' quip that God made cats so people can have the pleasure of fondling the tiger.
Appearance   4.8 / 5

Reportedly fruitier (re: more acidic) than Ben Tre province cacáo, Marou elects a compromise in constructing this large framework of a 76% bar. In so limiting the sugar content to 24%, it compensates with a fairly copious added butter pad & thereby psychologically sweetens the formulation. The net results in some occluded flavor, however, giving the bar an overall opaque quality. In effect it domesticates this Asian tiger into a bit of a fat pussy cat.

But only up to a point.... for Bà Rịa 76% projects a simultaneity of whatever flavors within, & stacks them vertically, ineluctably, regardless of whether one chomps on the bar or lets it melt on its own accord.