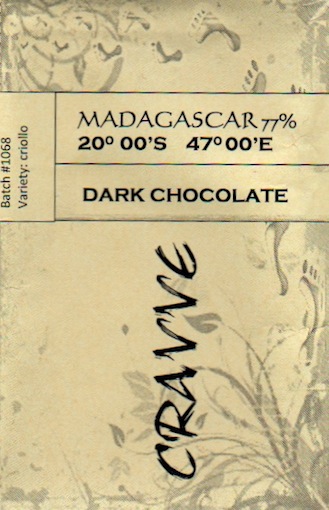 Impact
A good thing never lets you down. No, it kills you. Twice.

A grand opening from some chocolate wizard quickly morphs into the grim reaper sent from the future to hasten your demise.

Chocolate crafted the way adultery is committed: on the run, on the sly, during the time not accounted for (thank you, Vera Pavlova). And then it returns home as if nothing ever happened.
Appearance   2.2 / 5

Aroma   6.7 / 10
What does death smell like?
coastal... lahar / lava flow + steaming compost (or as they say in Australia where Cravve sweats these bars out -- 'pong')
gives way to coffee grounds, then vetiver the junction to a mighty hot caramelized mocha
thick, brooding, & basal
Mouthfeel   12.1 / 15
Flavor   31.3 / 50
jumps out of the crypt in the dead of night... eat it & sign your own death warrant: rare chocolate cake for the origin, brownie strength -> toasts up some scorched flour & burnt coffee grounds -> relieved by lime smoke-retardant -> dies out vanilla-ash -> persistent cocoa after-math
Quality   8.6 / 20
So much for respecting Madagascar's rather delicate cocoa gemstones. Sourced from Pralus' Nosy Bé Estate.

Evidently the firebrand François Pralus extends his hallmark hot-button roasting technique to his post-harvest methods as these are terribly smoked-tainted in the drying. Either that or Cravve just torches them with the gleeful rage of an arsonist.

A heavier than average cacáo-weight for the origin. Most Madagascans cling to around 70%, this tips the scales at 77%+. Perhaps fearing their bright, legendary volatiles at such a high percentage, Cravve chooses to commit further violence against them.

In any event, a glaring mistake. Funny thing, turns out to be a pretty good mistake... at least until the full onslaught of the immolation exacts its toll. Strong CQ (Chocolate Quotient for baseline cocoa character) at the front quickly decomposes into char in yet another redeeming feature of this bar: poof length.

Cravve somehow manages to salvage just enough of those esters to create a lime-like rinse that douses the flames prior to re-fueling the fire for more ashes to come, then covered up in vanilla.