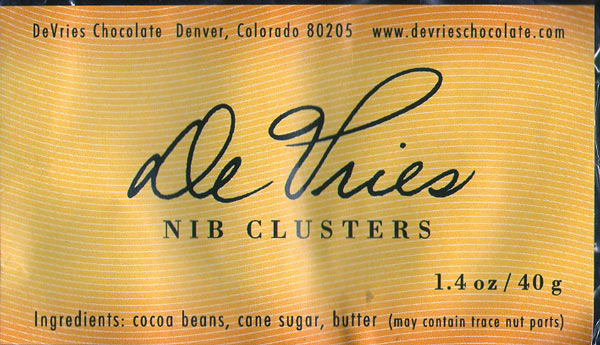 Impact
REDUX REVIEW -- below are segments of De Vries' Nibs Clusters, initially released in 2009, followed by a refresh in 2014. The Rating & Metrics to the upper right reflect the upgraded batch.
3 degrees of Steve De Vries: dualing textures + that signature flavor, all in a wearable concept –- chocolate medallions that if affixed with hook ‘n chain could dangle as edible bling.

The cute stuff ends then re-begins there as what was once a jumble of jungle flavor that cut the tongue off with a razor-sharp machete upon its release in '09 to merit the label's lowest rating to date (7.13) & made-over now to vault into some naturopathic exfoliant that soothes while stimulating the nerves at the tip of every taste-bud.

2014: virtually the same as it ever was… stanky-bodanky rot-pile -- live, active microflora
screw biotic supplements, take 2 of these (must be good for the gut)
yes, what the sophisticrats term "pungent"
Mouthfeel   13.4 / 15
Flavor   45.7 / 50
2009: texture-blocking flavor... wading among chocolate rocks with occasional smooth pools interrupting the experience – just swallows your appetite like the Everglades -> come up for air on a sip of fruit juice-rum (pretty good) but green-olive leaves are stuck in the muck -> red pepper -> drift wood -> not so much moving along but descending further into... earth -> springs back up black bitter olive -> welcome nut relief... by now the chocolate bar aspects are thru & it’s all nib kicks from here -> bitter feral ground effects, a hard jungle fist & the fear needle swings wildly to alert for an apex predator -> calms down on strong dried cocoa-espresso

2014: dry cocoa -- tannic & dusky -- rushed by sweet sugar, starfruit, & pulusan (similar to rambutan but sweeter than it or lychee) -> ripe banana (the virtue of practically all Nibs everywhere) & duku -> flickering red (ground cherry) -> leguminous bean ending
Quality   17.9 / 20
What started in 2009 as conceptual prototype under (much-needed) development turns out improbably sweet for what amounts to a heap of Beans / Nibs.

Pioneer Steve De Vries, a virtual one-man pop-up shop nowadays, comes & goes as he pleases, as the spirits moves... intermittently. Which means whenever he releases the goods, it counts seeing how commerce seems the least of his motives.

Such a dramatic upgrade, all the way around: from the seed selection (clearly Hugo Hermelink's Finmac Finca in Costa Rica tends to its trees as well as its business like never before) to the processing (especially the highly considerate roast), the formulation (that sugar spike in the underlying chocolate indicates barely Semi-Dark range, in contrast to the former 77% Brut force that substantially in turn downshifts the acidity + bitterness levels) & the pre-treated / pre-sweetened Nibs. That contributes to the Texture -- so tooth-friendly… no Nib-picking between the contact points; thus no need for floss.

Granted, the Flavor spectrum presents a little limited, though fairly broad nonetheless for a Nib package. And what shines forth are, quite unexpectedly, fresh & hi-def.

No wonder De Vries walks around with that impish grin.