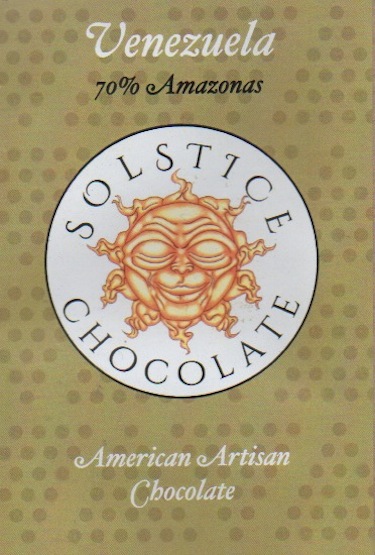 Impact
The Amazon still holds a mythic dimension in the imagination. Pristine despite the fact that, say, isolated cities like Iquitos -- accessible only by plane or boat -- teem with prostitutes. Or the Napo River abandoned houseboats.

A Selva Nublada (foggy rainforest) of a chocolate bar until the cut 'n dry finish.
Appearance   4 / 5

Hi-roast, in parts, grating on nearly-raw astringency, in sections, matched by choppy Texture addled with a big butter cut (probably in excess of the officially listed CBS [Cocoa mass / Butter / Sugar ratio]: 12:13:11)… all points to inconsistency. To Solstice's credit it almost pulls off a sleight-of-hand in canceling out the deficiencies only, alas, to conflate them in the dry end.

Undeniable potential glimpsed during the opening frame & seen elsewhere with the Playa Alta strain (aka its trade name Amazonas -- introduced to the consumer world way back in 2010).

Going forward, extending those initial tags would serve Solstice & this bar well, for that's where this cultivar's best character resides. And that requires improved post-harvesting at the source.