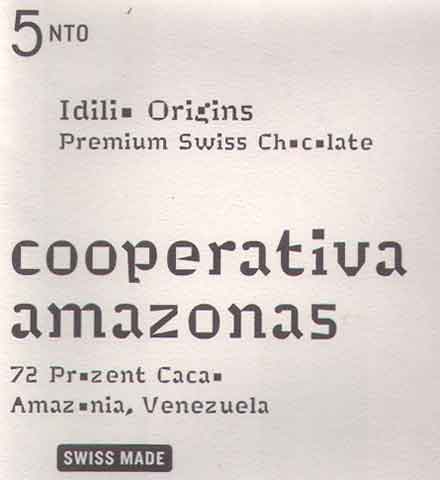 Impact
Supreme authority so intimidates that no one dares to challenge it. Naturally someone will... & must. Either the brazen idiot doomed to fail or the bold genius destined for greatness.

Science be damned, Klaus Blumer – the brainchild behind Idilio – holds an old, now-novel again, theory. Neither the Outer Amazon nor the Western Valleys sloping away from the Venezuelan Andes, nor the evermore remote Mesoamerica, rocks the cradle of Criollo (or perhaps even the entire species).

Hmmm, ‘interesting’, to use a term on the C-spot’s™ Banned Word List. Maybe it helps to ‘go-native’ when embarking on such a quest. Whereas Amano Art Pollard taps notable Venzy expert Maricel Presilla to procure his bronco beans labeled ‘Montanya’, Klaus Blumer goes right to the heart of the matter by marrying a Venezuelan, declaring love greater than business &, moreover, by going for the holy grail of all cacáo crusades – the birthplace of the most prized varietal!

Believing he found the chocolate equivalent to the ‘source of the Nile’ at the headwaters of the Orinico (curious how he managed that in the home of the Neolithic Yanomani), he then freely publicizes his findings - openly & transparently - so everyone can ruminate over the controversy as opposed to playing a shell parlor game. Rare, indeed.

Did he actual discover it? Hey, with a taste like this, it could be Mother’s (the parent of all cacáo) or just Smucker’s™. Either way, ‘special’.
Appearance   5 / 5

Here’s the advanced course, direct from the source. Very streamlined & concentrated flavors with fleeting accents subsumed back into the profile for even denser deepstack that make it deceptively simpler than it actual is. Amazingly compressed verticals; tremendously high CQ / natural chocolate tone for a great backbone. Holds its posture with poise - no soiled stains or chem peels – yet primordial (albeit hyper Swiss-processed) compared to the manicured types of more or less the same strain grown in nurseries to the northwest.

A ‘wild’ cacáo that in all probability comes from a cross of an Amelonado with the Guiana-type which geneticists call the Playa Alta hybrid.