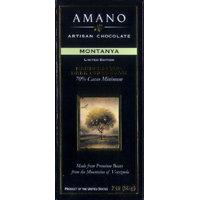 Impact
Art Pollard of Amano is on a mission. Picking up where Gianluca Franzoni a/k/a Mack Domori left off in venturing farther afield, summoning the spirits of those risk-takers of yore - sea-farers & explorers.

He went to Bali - way off the grid – to seize Jembrana.

Now, like MLK mimicking Moses going to the mountain top in John Ford-style... Amano’s Wild Wild West adventure: a horseback ride-for-chocolate takes him away from his Monument Valley hideout in Mormon Utah to the coastal mountain redoubts of western Venezuela. The cocoa-gaucho playing gotcha-cacáo in that part of the world where ultimatums often come down to ‘gimme the gold or take the lead’. Amano demands brown-gold in the form of these beans instead, to be refined into a bucking bronco that just kicks it in the mouth.

Both of Amano’s Ocumares share a common bitter-acid refrain. This, however, a different animal that hardly typifies Ocumare, quite remote from the clonal series. Given the name & taste, it might contain Theobroma gileri aka 'cacao de monte' (mountain cacáo) as much as Theobroma cacao. Packs a whallop at just 25% cocoa mass; Amano doing all it can to control this foot-clomping beast of burden by upping the butter to massage & assuage it. Sweet bitter, a good bitter, slightly unwelcome in its persistent transgression over a long length (that demos its feral nature) but short contour; & sparse variety in the way of range. Far from simple though... more like its complicated sense of place: oxidized from peak-to-peak, considering some altitude is involved in both ends of this chocolate’s processing, both where’s it’s grown in the coastal mountain range of the Venezuelan Cordillera (in all likelihood sub-Andean & probably at lower elevation than, say, the El Ceibo cooperative in the Altiplano of Bolivia from where De Vries sourced his 80%), & then ground in Orem, Utah USA.

Who knows exactly what effects rarefied air has on chocolate bar-smithing. The net tastes of deep fermented / still-wet beans; imperfectly winnowed, roasted just this side of ashdom-come; then conched on the gentle side producing a bucking bar... acids... bitters... everything but the thorns... finally smacked in vanilla (recalls that ‘pig with lipstick’) without which this may be too bumptious.

No coward; good tone but the meat’s a little tough & nothing falls off the bone. Lots of haunting character though.