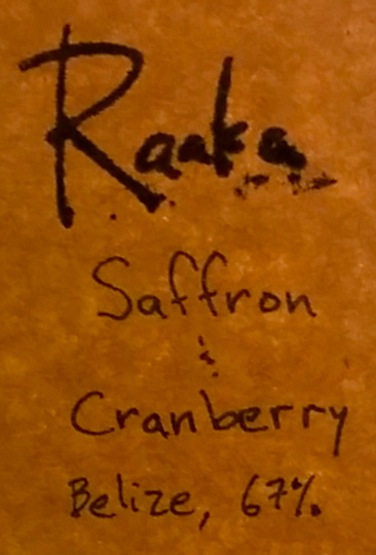 Impact
Raaka in NYC drops this bar on the taste buds with all the force of a neon billboard in Times Sq. falling out of the night sky
Appearance   4.3 / 5

Forget raisins in chocolate (not to mention wine). This along with Chris & Tom's + Prieto proves that cranberries serve up a better match.

Cranberries, which can express quite tart, kept in check by sugar & cocoa butter oil. They generally override the "raw chocolate" base, splaying red essence onto a brown canvas. And enhance it to bring up basal chocolate in a fraught seed lot. Indeed, the unsuspecting will hardly recognize this as an un-roasted cocoa at all. Then subtling influences of saffron ennoble the character. The crocus works rather subliminally except for the end when it shows more apparent in a quasi-bitter guise.