Impact
In a battle to the death between snake and crocodile, which cold-blooded carnivore prevails?

Residents in Australia's Lake Moondarra caught the brutal, 5 hour-long matchup pitting a 10-foot snake — likely a python — & a croc. It all ended with the snake constricting the crocodile to death. Oddly, eyewitnesses claim the croc went down rather calmly, even peacefully -- probably due to exhaustion.

Such a tussle no doubt caused some hunger for the snake which then proceeded to drag the dead croc out of the water onto land &, over the course of about 15 minutes, swallow it whole.

This bar stretches as long as a croc tail & coils around the tongue like a snake in a duel of black spice / black fruit. Humans no doubt can devour it in less time than it takes those slithering beasts. 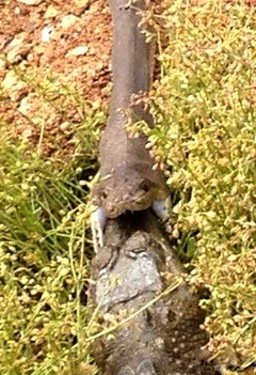 Head First, Open Wide
Appearance   5 / 5
Zokoko ups their game on what already amounts to one of the most elegant presentations in chocodom
Aroma   8.9 / 10
very reclined cocoa-cream with a fleck of nutmeg + flint stone
comes balsamic upon airing out
Mouthfeel   12.3 / 15
Flavor   42.1 / 50
cocoa instantiates raisin-licorice, thick & substantial -> cotton turns to dough -> black poundcake -> gingerbread dipped in cream (sweet) -> doodad of nut seed oil
Quality   15.4 / 20
Solomon Islands… a pet project of sorts for the C-spot®. And ever more so for Michelle & Dean Morgan at Zokoko who travel back & forth to the islands from their Aussie base.

They work with the SolKom group which exports mainly to grinders in Malaysia, hoping to improve seed selection, quality, yields, & install solar driers instead of the fired kiln that create smoke-tainted cocoa. For a flavor of that, just check Daintree's Solomon Island bar.

This bar here forms the successor to an earlier prototype but trimmer in range if no less potent. In fact, just the opposite: its persistent power centers around that licorice impression which propels the entire bandwidth at near-cloying levels (perceptually in excess of its 30% sugar count) with raisin on one side & ginger on the other. Just throws down that strip & proceeds to shred it.

Super unctuous slip on the mouth caps the experience.