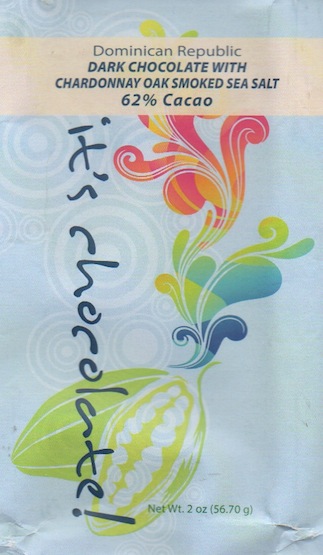 Back to sanity: of the 8,700 self-portraits drawn by Southerner Bryan Saunders, 50 became wildly celebrated in an exhibit alongside Damien Hirst at the Maison Rouge gallery in Paris. They're the 50 he drew while on drugs. Each created under the influence of a different substance -- from heroin to cocaine thru lighter fluid, then bath salts ("they're what everybody says are causing people to eat each other's faces" he says) & prescriptions like Cephalexin & Risperdal ("That's the popular thing today").

Saunders swears he hates drugs but feels obliged to try new ones "just for the drawing".

Obviously art itself is a helluva drug.

This bar too immerses the senses in a salt bath rather than the little salt zaps like most others of its ilk. 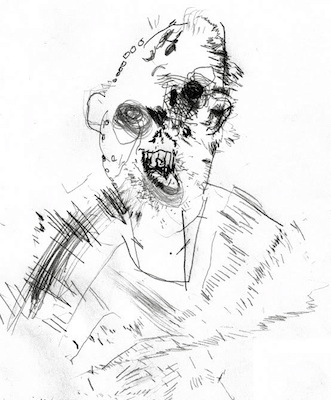 Self-Portrait on Bath Salts by Bryan Saunders ("Drugs Make You Ugly")
What about this unscheduled drug chocolate?

When gone, people will be eating their own faces for every last lick.
Appearance   3.5 / 5

Aroma   8.6 / 10
pines away… on sweetly piercing pineapple backed in pear & saline minerality
only with more air time comes an oaken chocolate
Mouthfeel   13.2 / 15
Flavor   44.8 / 50
green grape immediately taken under by a salt mine... plunges into a magma chamber of deep chocolate fudge toffee (extraordinary)... hangs down there with a shaft of maracuya (passion fruit) from on high above -> butter caramel evermore…
Quality   18 / 20
it's chocolate throws the works at this… the whole make-up kit (vanilla , lecithin, added cocoa butter) plus the botox uplift of chocolate -- salt -- then gives it the ultra-deluxe spa-treatment of chardonnay-oak smoking.

Though less dramatic than Soma's Stratus nibs aged in wine casks or Raaka's in bourbon barrels, this proves no less pronounced.

Southern comfort, chocolate style. Rom Still of it's chocolate in the Carolinas really tailors precisely. On the face of it, 62% cocoa-content sounds meager, especially & except for a glam origin like the D.R. It absorbs the sugar-load, then sodium subsumes it in what amounts to a salted caramel bar. No uplift here though, just stretched flavor…. exceptional path-volume-velocity-reach. It all renders a far darker impression than either its contents or percentages let on.

KInd of a one-trick / one-pitch pony. One that should become a pet pony worth riding everyday.