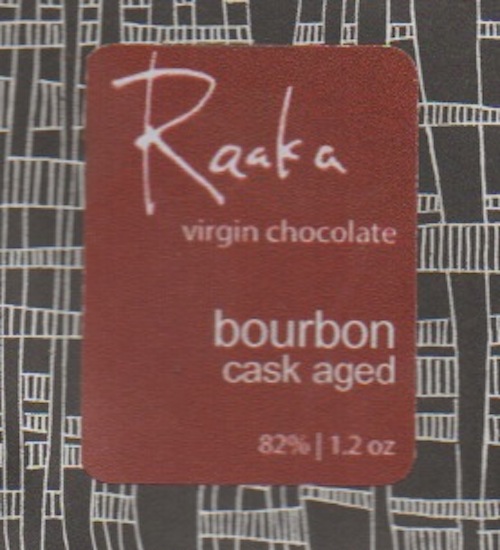 Asked where the capacity-limiter or bottleneck in the operations lies & the surprising answer comes back that it's neither the cracking nor conching but the wrapper station. Star wrappers for the label fold 150 bars / hour, but there's no room for more than a couple of them at a time. At any rate, best to insure those hands like Jo-Lo her ass.

It helps that, being "raw" (though Raaka wisely drops the pretense of spurious "raw chocolate" in favor of the olive oil-like "virgin chocolate"), requires no drum roaster, or any roaster at all. Instead, bourbon casks dot the place. Raaka employs them to age the cocoa nuts ultimately ground into this bar, imparting flavors otherwise contributed by added vanilla, as well as its own wooded character.

Over the years, & well before it became vogue, the C-spot® took many among the cluelessly confused "raw chocolate" cult to task. Given Raaka's gen'l M.O. (despite the altered tag line of virginity, the company's name means 'raw' in Finnish) & its proximity to Plum Island Animal Disease Center located just off the coast of nearby Long Island, NY, some may suspect that its facility could serve as a fitting headquarters of sorts for "raw". Plum Island, after all, houses no discernible civilian population because, as a federal research center that investigates animal diseases such as foot-and-mouth disease & swine fever, who'd want to live there? It is therefore safe for "raw chocolate" quarantine considering that "raw" contains probable higher platelet counts of pathogens which normally are killed off in the high heat of the roasting step.

In this case, however, that would be misleading. For Raaka solves the raw-choc puzzle of maintaining the healthy benefits of cacáo while delivering supreme taste.

(Sidebar note to the Sterilization Council who believe that eating a lick of "raw chocolate" will result in sudden death: humans ably digest this stuff daily & to date there exists no reports of anyone dropping dead from it. "Oh", they say, "but it only takes one". Well, tell that to the lettuce, spinach, beef, & peanut industries that survive quite profitably after their pathogen-borne fatalities.)

Raaka's Bourbon bar... traditional yet innovative; &, when it comes to matters of good taste, add in 'substantive'.
Appearance   3.6 / 5

Some choc-talkers in this field think that the only "fine" "raw chocolate" to date comes from Pacari out of Ecuador. Where have they been? Bali, Brazil, & now this from Bolivia dispatch the thought.

A daring 82% sourced from the CIAAB co-op (Central Integral Agroecológica de Alto Beni) in the beautiful valley centered around the village of Palos Blancos, Bolivia as part of the same seed allotment as Taza's 87% Dark.

Where Taza omits conching, Raaka skips roasting so crucial to flavor development via heated Maillard reactions (hence the company's Finnish name). In this trade off, the two barsmiths almost arrive at the same net result. But Raaka then compensates for its non-roasting method by a) adding 5% extra sugar & b) aging cracked cocoa Nibs in bourbon casks.

Realizing the limits of "raw chocolate", Ryan Cheney & Co. at Raaka brilliantly subject the base material (cocoa) to what amounts to an additional "fermentation" sequence, so to speak, by way of those barrels to steep Nibs in 2 essential ingredients for gastronomic heights: environment & time. A sort of encapsulated & measured terroir lab.

As expected for the un-roasted "raw" category, very little core chocolate flavor, compounded here by perhaps a genotype, or at least seed mix, that's rather vacant in this one aspect anyways, as evidenced in Taza's roasted version. Therefore this bar lacks some bottom underside.

But deft deployment of maple sugar sap replaces a portion of those missing Maillards with some caramelization / candied FXs of its own attained in its boiling process.

Both the casks & the maple catalyze reactions in this base cocoa that otherwise hardly exist.

Plain old ordinary straight-chocolate then may go the way of the missionary position & vanilla sex. Or in another words, a quaint fall back position. With results like this Bourbon bar, few will mind.

And an idea of what Rogue's bourbon-inflected Balao could've / would've / should've & still might become if it thinks more similarly: among the greatest bars ever.