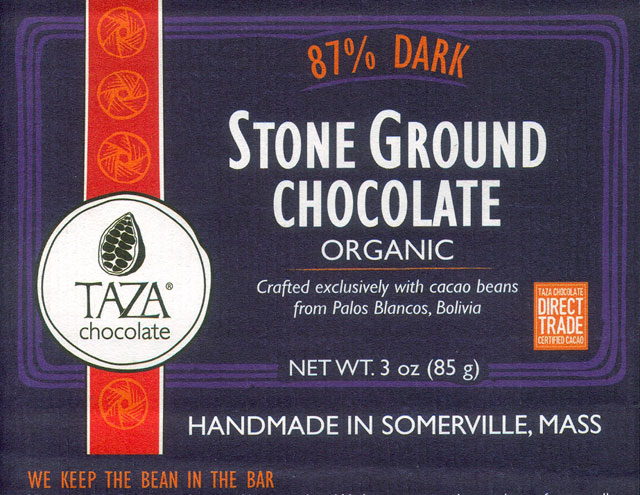 Impact
The stat sheet on CIAAB (Central Integral Agroecológica de Alto Beni) lists a co-op that inhabits a beautiful valley centered around the village of Palos Blancos, Bolivia. A chocolate Eden of sorts in the Southern Hemisphere for online tourists roaming the world from the safety of their living room. Google maps with a carat to point out their exact location offer the false panorama that geographically-challenged, stay-at-home travelers can ‘get to know’ the place. Then chocolate makers up north complete the picture with propaganda about cute little farmers lovingly dedicated to harvesting one-of-a-kind cacáo... a tale re-churned by scads of bloggers so everyone can feel good while enthralled in their chocolate meltdown.

At roughly 13% sugar (the cocaine in the candy) & no conche, this bar comes close to unadulterated.

Nearly proof that vice & virtue can co-exist. Hypocrisy depends on them together for it can't have one without the other.

Aroma   8.9 / 10
antique chocolate: woods of old-growth trees, perhaps even primary forest, rubbed in vanilla & hazelnut oil -> cut by marshmallow hibiscus -> underlying cocoa with a raw edge (TBE somewhat for an unconched bar) -> dotted by a single mushroom cap (captures the image of an art collector examining wooden sculptures for knots with a magnifying glass)
Mouthfeel   11.3 / 15
Flavor   39.8 / 50
much darker shades, as expected with 20% less sugar, from Zokoko’s take on the same origin: snapping raw coffee berry -> black mission fig -> starts dying fast into cocoa lipids of some rancidity -> caulk ‘n ore for Oreo™ dough soaked in resurgent café -> at the very rim a micro-trace of fruit atop some bedrock to redefine ‘lime-stone’
Quality   16.1 / 20
Chocolate masonry emblematic of retro-American styling (perhaps even pre-retro). Forget licking the spoon; just stick the tongue out & directly catch the granite roller itself, bits & pieces of which apparently scraped off & fell into this batch.

Some extol the Italian renaissance of the Azteca modica. This pre-dates that by centuries, maybe millennia.

Taza proudly boasts that no conche ever gets between their beans & your tongue. They sneer with a defiant hiss at the very mention of one, as if a conche is a crutch used by handicapped barsmiths, the equivalent of wearing skateboard helmets & knee pads on the beginner’s course.

These guys free ball & ride shotgun instead, laying it squarely on the cacáo.

A thrilling disparity / dichotomy between a rugged roast & half-bore refinement that forms a canyon for flavor excavation begotten from the same working priciples as a mining company. The net alludes to raw chocolate barrenness covered in occasional burn & tread marks (possibly more on the vanilla than the cocoa) aided by minimal sugar (though it all shows unexpectedly sweet). A brilliant confirguration really; virtually zero bite to the bitterness nor much in the way of abrasive acidity (wonder what the pulp tasted like on the ferment). If the “Raw” tribe could approximate this at 65% they’d be nominated for a Nobel Prize in chemistry.

In a word, singular.