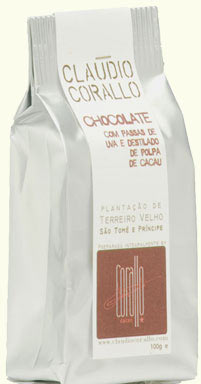 Impact
Epic chocolate-making. Flavored Gatorade™ (shhhh... confuses the liquor licensing authorities)... for well before, during, & after the game. "Grand Kru', so named by the C-spot™ (the official label calls it Chocolate with Raisins & Cocoa Pulp in Bitter Liquor) because a) this contains fermented cacáo alcohol as fine as Grand Cru wine &, more importantly, b) in homage to the nation of The Kru, perhaps the most African of Africans, who so resisted being taken into slavery that their would-be masters simply gave up trying.

Mad-genius Claudio Corallo, the Cacáo Jones of the trade, knows each & every one his beans better than house pets. He grows & harvests them himself. No one is more committed. He tends to a humble &, until now, neglected varietal (a direct descendent of the 1st cacáo transplanted to Africa from Brazil in 1822 so we’re tasting some history) which had been a dried-out seed of an underdog that lay for years in a dark corner until Claudio cut some bush & the rains came... then the sun shone. What he coaxes out rivals a big sound from a tiny violin - basically making him a virtuoso - & this is his masterwork. It probably enjoys cult status back in his homeland of Italy, where intensely proud & moral men no doubt sacrifice their virgin daughters for it.
Appearance   5 / 5