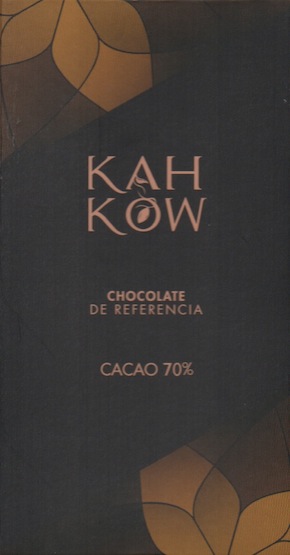 Impact
From Rizek Cacao S.A.S. -- one of the most prominent families in Dominican cacáo culture for over a century now.

Recently the clan wondered why should the Euros & NorteAmericanos capture all the value-add in transforming their cocoa into chocolate. With some distinct advantages (such as cultivating among the finest strains anywhere), Rizek sets-off to vertically-integrate the entire chocolate chain at home in this venture named KahKow.

Judging by the plain mainstream taste of this, it's aimed squarely at the sweet-toothed domestic market (even at 70% cocoa-content… with more sugar loading to follow in upcoming Daily Reviews).

Consider it a Lindt-level brand for natives.

The Dominican Republic (D.R.) boasts, arguably, the most genetic & flavor diversity of any cacáo origin on Earth.

Rizek, the owner-operator of KahKow, tends to around 3-dozen of its own cacáo properties, including the fabled Los Ancones which Cluizel once upon a long time ago crafted into a fireworks display.

So renowned that during the 2013 World Cocoa Foundation (WCF) conference in The Dominican Republic, Rizek conducted a tour for the membership to expose them to fine flavor cacáo -- a trait that the industry lost sight of in the last half-century or so to concentrate instead on armies of vapid clones bred for disease-resistance & high-productivity.

Judging from this bar at least, they'd be hard pressed to discern the difference as KahKow 70% reinforces norms… albeit with a positive distinction.

Compared to Los Ancones or Coppeneur's Buena Vista (another Rizek treasure grove), some might say this approximates a dud. A kind of anti-D.R.: simple & straight-forward with a generic dose of vanilla to smear over any nuances just in case any were there. Then interred for good by cocoa butter, if the CBS (Cocoa mass / Butter / Sugar ratio) of ~2:5:5 points anywhere close to accurate. Such as the much-promised "red fruits & prunes" in the liner notes on the packaging which couldn't be any farther from the… well, experience.

But a safe if drowsy Dark; clearly geared for a market of narrow expections & standards.

Kahkow 70% delivers that baseline but distinguishes itself because of its overall high quality -- another facet which escapes the trade generally in its quest for mass production fodder that usually stands for nothing but the color brown.