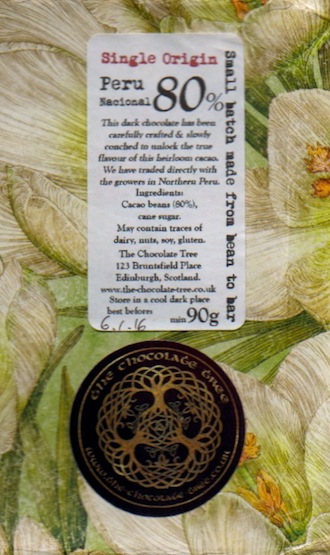 Impact
Already in its young life, The Chocolate Tree (TCT) in Scotland has stacked up several firsts with its bars from Madagascar -- 100% & the Unroasted.

And now another: the first to scale the 80% Class with Peru Nacional.

This site begged for such long ago -- like for 3 years (seems like, so… OMG, ancient). Finally a barsmith heeds the call… only to remind 'beware what you wish for'.

A bar that from start to finish warps into a reverse time-lapse to end up back at Ness of Bogdar, Scotland -- the Neolithic era circa 3,300BC. Sealed with what appears to be a talisman (click image at right to enlarge).

Aroma   6.9 / 10
a whiff at odds with itself… some good / some bad, take a pick:
vinegar 'n manure
wet dog with a caramel heel
tea rubbing up against flint stone to spark the tomato-likeness of cocona
sheesh… intriguing
Mouthfeel   13.3 / 15
Flavor   39.6 / 50
chocolate fudge, brownie, hash (so far, all good) -> Oreo® sandwich (a bit pedestrian & a consequence of over-roasting) -> thin colloidal silver ('interesting' to use a term on the List of Banned Words) -> licorice (alright) -> bitter coffee (an assault on the senses) -> the now-hallmark treacle that accentuates recent harvests from Marañón -> some heavy grip post-stringency (arrgh)
Quality   15.2 / 20
Unrecognizable as Peru Nacional; some of that attributable to the 80% weight.

-- the highest CQ of any Marañón Canyon Nacional to date with core basal cocoa (a strong front runner that, alas, loses stamina midway & veers off track, thereby losing integrity)
-- that CQ swaps out delicate esters so prized from this varietal
-- a generally deteriorating final trimester which descends into a bog of sickly sweeteners, burnt coffee grounds, & a corrosive undoing

TCT acknowledges the temperamental nature of this diva, compounded by some challenger ferments.

Overprocessed; too much heat & friction throughout exemplified in the Texture, outstanding such as it is but out of character for the type. The duration of the melt (slower than usual), the body (greater tissue) & quality (of density) suggest over crystallization either at the refining &/or tempering stage(s). Despite all the processing, considerable astringent residues mar the back end, pointing to some affects in the post-harvest at the source in Peru.

A bar requiring more time on the drawing board.