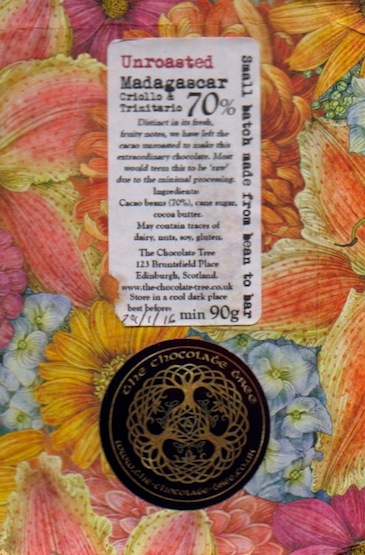 Impact
Madagascar recently has been hit by both locusts & bubonic plagues. The former, planter-eaters, threaten the island’s food security while the latter, carried by rats, fleas & cockroaches, claimed 100 lives, mostly in a village near the north-western town of Mandritsara.

Estimates to eliminate them climb to $50+ million.

So-called "raw chocolate" also constitutes a scourge of sorts that descends upon the chocolate world. This bar from Madagascar could well sink the island if it holds true to "raw" standards.

But thanks to proprietor Ali Gower, The Chocolate Tree resists a) the temptation to hop on the marketing bandwagon of "raw chocolate" (most of it slag anyways, except for outliers such as Raaka or Pacari, containing cocoa from Ecuador, with a smattering from Brazil & Bali + a couple other origins) by labeling this 'Unroasted' instead; &, moreover, b) the pitfalls of "raw" that entice termites more than humans (with typical inbred flavor of sheet rock).

Maybe the government should consult The Chocolate Tree on those other infestations.
Appearance   4.5 / 5

Aroma   6.4 / 10
a hospital medicine closet filled with bandaids & iodoform
then an empty cedar chest until… upon closer inspection some spice shakes laying about… before a final turn into a bristling tart

Uncompromsingly good &, moreover, full -- for unroasted or otherwise. The sacrifices thought endemic in the 'roast or not to roast' eeny-meeny-miny-moe pact are overcome, miraculously synthesizing the best of each. For this bears all the pretense of a fully processed chocolate (viz., roasted & refined albeit with the lightest touch) while preserving the edge traits of "raw" (+, presumably, its greater polyphenol count). And it maintains its structure when almost all other "raws" collapse in mid-palatte. The breakdown here arriving later & only at the edges.

Of course this particular island cacáo's rather feminine nature possesses an inherent swoon factor -- a mouthwatering fruit cocktail -- that gives it a head start over other cocoas, & allows it to buffet at least some of the downsides to "raw" preparation (or lack therein).

That this displays more traditional Madagascan profile -- & in abundance -- than The Chocolate Tree's unsweetened 100% goes beyond the mere differences in percentages & processing, owing in all likelihood to differing harvest conditions at the source.

In any event Gower & Co. defy expectations for both bars (admittedly quite low to begin), then exceeds them in quantum leaps & bounds.

Though the fruited impressions here fall shy of the sparkling highs lit in other chocolates off this island, especially Patric's Madagascan suite, this concentrates them as if in a jam, seemingly transforming a bar into a jar. Which in turn tempers the island's hallmark acidity that can often blister the tongue.

Unroasted Madagascar features appreciable, if not quite sustained, basal chocolate running beneath… a quality so infrequent even with roasted Madagascar cacáo to run counterintuitive that maybe the secret to coaxing out those lower depths lies not in heat but the reduction thereof into coolness. Either that or the motor & the stones of the CocoaTown 65L utilized by the label churn hot enough to cause the apparent Maillard Reactions in the baseline flavor. Or, wild speculation, the Druid-worthy symbol adorning the wrapper (click image upper right to enlarge).

Quite the manifestation of what a Madagascar cacáo can fully project. If not for the odious nose, this would vault into ratings nirvana.

The Chocolate Tree forces a reconsideration of preconceptions about unroasted chocolate with this the sweetest "raw" bar currently on the planet.