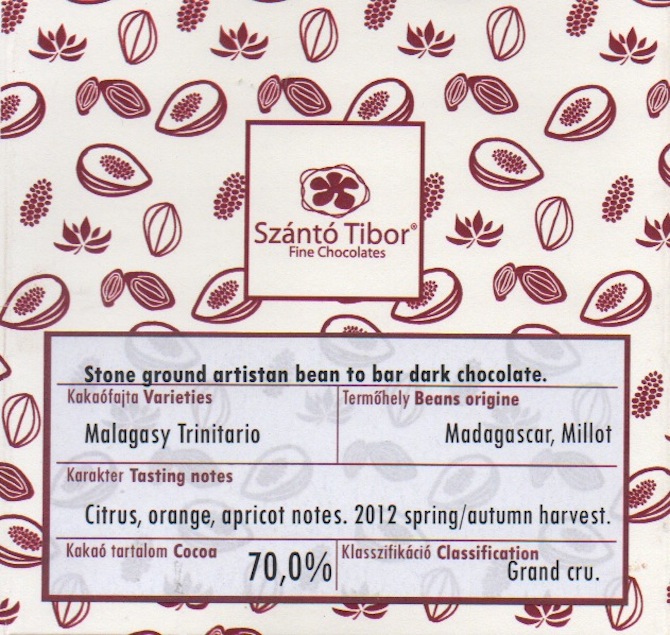 Chew on that name for awhile.

Considered one of the greatest military & social leaders in Madagascan history, Andrianampoinimerina ascended the throne in a coup aided by commoners & slaves (as well as European firearms). His reign formed the adhesive for the political unification of the island.

Szántó Tibor takes that advice to heart in lightly processing this bar whose cocoa hails from Andrianampoinimerina's homeland.
Appearance   4.7 / 5

Aroma   8.4 / 10
fruit-leather 'n tobacco
moth ball in a cedar closet
vetiver (the tell-tale of this origin)
Mouthfeel   12.4 / 15
Flavor   45.2 / 50
berry break out (rasp + cran) interspersed with cocoa dust (of the fresh green variety) -> transitions to apricot -> tart marula -> dry gin (very Madagascar) -> OJ -> stone granite tops it off… raw dark gianduia in the aft-shaft
Quality   17.7 / 20
The review here pertains, as with most of the C-spot's®Chocolate Census, to a totally blind session, unaware of the origin, the barsmith, the type, or percentage.

First impressions of this bar clearly points in the direction of Madagascar. But by the midsection, Dominican tones register & toward the end this rivals Pacari's 70% Raw & Quemazon in its retro-American austerity.

That the Flavor descriptors above almost identically match those of Szántó Tibor's own notes (click image upper right to enlarge) without any foreknowledge of them whatsoever demonstrates just how clear & well-defined they are expressed herein. Rare in this premium choc space for palates to so closely agree. With this bar any who miss it would have to be both tongue-tied & taste-dumb.

All those fruit packets play on as huge psychological sweeteners beyond the 30% added sugar. Plus definite core cocoa, albeit thin & fleeing, adheres to them to provide a measure of some balance that eventually vanishes... only to reappear as an afterglow in that hazelnut / gianduia phantosmia.

A real eye-opener & mouthful for a tried 'n true origin that occasionally gets tiring but revived by bars like this.

And the legacy of Millot, one of Madagascar's most enduring estates, grows on...

A bar that re-awakens the original infatuation with this island cacáo.