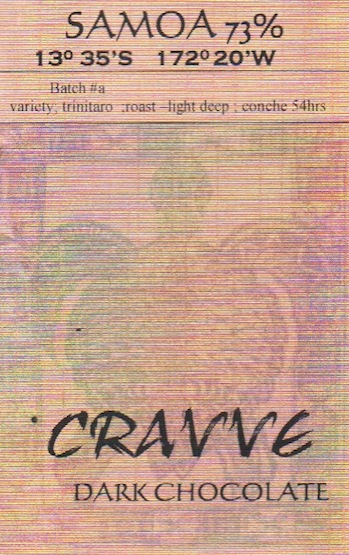 Impact
Air Samoa charges passengers by the pound. That is, by their own weight. Once cogs in the matrix's machinery, humans are now just cargo. Rates range from $1 to a little over $4 per kilogram depending on the length of the route.

That can add up to a lot of baggage.

According to CEO Chris Langton the move promotes health awareness in Samoa which weighs in with one of the world's heaviest levels of obesity.

Maybe that has something to do with the island's cocoa, renowned for its big fat butter content. This bar likewise tastes super sized: some heavyweight chocolate that just trips the scales.

Whether by weight or by flavor, whatever the freight, get this bar.
Appearance   4.3 / 5

A new vintage & a new source from Cravve's prior Samoan. That proved sturdy & reliable, quite respectable really. This takes it up even further. A variety of cacáos pulled from several properties, clearly of pedigree which should come as no surprise since Samoa's planting history includes such.

Though 73%, this bar poises well for its weight; indeed that number tips just a part of it as Cravve apparently only measures koko malu (Samoan for 'cocoa mass') in its calculation, leaving out the add'l butter padding. In any event, it all feels self-contained & comfortable within itself.

Peter Mengler of Cravve in his liner notes is spot-on about the caramelized cashew which a blind-tasting roundtable readily detected. A tremendous accent in the chocolate annals.

Other than the Textural woes, a pretty complete bar.