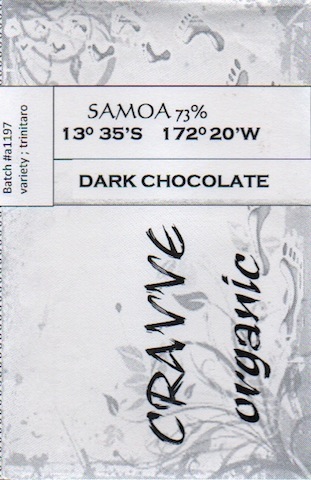 Impact
Mau a Pule literally translates as 'strongly held opinion'. It references a steadfast non-violent movement in Samoa despite scores of its members being gunned down on “Black Saturday” in 1929 (well before Ghandi & MLK Jr.).

This chocolate equally stands its ground even as the bar melts away.
Appearance   4 / 5

Evidently a different allotment than that one as this displays a combination uncontrolled ferment / insufficient conche in the Aroma. Only a little of which shows thru on the palate though. Different experiences in the Flavor dept as well. The 2 flip the field on each other: Biokoko's exudes lots of fruit tones & null chocolate; Cravve 73% here delivers just the opposite.

Streamline / very focused (washing the seeds post-harvst removes compounds that contribute to flavor pre-cursors). The few offsets (such as the mint) might derive from machinery that also handles herbs in flavored chocolate confection since these notes pop up in other Cravve's bars.

Whatever the case, a uniquely Samoan chocolate that heralds this tiny island boasts some supple yet sturdy cacáo.