Impact
FLASHBACK REVIEW -- below are segments of Rogue's Jamaica Bachelor Hall, initially released in 2014, followed by a refresh batch in 2015. The rating & metrics are a composite average of both bars.
*************************************
More than practically anyone else loose on the scene today, Rogue Colin Gasko commands that his bars be approached as arts & science. This site, no stranger to over-inflation, obliges the appetite.

Where erstwhile purists have entered a Post-Exasperation period tossing in everything lying about the kitchen sink from peanut butter to peppermint patties & sticks of butters because buyers want ‘yum’ -- thus perpetuating market expectations that see chocolate as a stretched canvas for whatever the cupboard holds -- Gasko instead sticks to his guns. Hell, this chocolate warrior fights against Dark-Milk let alone Milk Choc. For that very reason alone he earns a 21-gun salute.

Committed to the very bone marrow, Gasko evidently sleeps thru arrows in suffering the slings of Costco consumers who demand the most product for the least price. Let's hope if he ever needs medical attention from the battle scars that there's no VA Hospitals scandal or Obamacare glitches, for chocolate itself -- touted health benefits notwithstanding -- is inadequate insurance coverage.

2015
tracks Aroma along with some sorghum -> reclines toward breadfruit & chestnut -> alternating current of nut woods & fruitwoods (elliptically centered about walnut / cherry) -> coffee-substitute chicory sweetens to carob pods -> just when thinking 'all done' comes a rare 'exquisite bitter root' of tonic quality ala apricot kernel -> blows out tobacco
Quality   17.6 / 20
Tastes shy of exclusive reserve, as if a shared purchase-order or at least cut from a similar allotment as Soma's Bachelor Hall -- the bars so parallel one another. The primary differential lies in the über-mechanics here. Roguester Colin Gasko brings a lot to the bar – like everything in his considerable arsenal... except defects. In a word: flawless (well, excluding the over-finessed Texture & the seed selection). A far cry from his initial Jamaican foray a half-decade or so ago.

But the instruments of scientific engineering so often aimed toward precision, measurement & objectivity are not necessarily progressive or utopian.

All the points in this chocolate so neat & tidy, which belies some of the seething substrata that scratches a primordial moment beneath the more supple inflections kneaded by a detached / uninspired cool despite the midline black brownie that hazards setting off a smoke alarm.

The calibration however & the self-conscious pretense, opposite of instinct in a kind of mid-life formalism, barely contains the Dona Nelson-like received impressions (her paints that leak thru the permeable canvas to create images on, not the back per se, but the other side)… they stream as much sediment as rapids & vice-versa; as much accidental as volitional. The frontal impressions are worked while the reverse / latent ones come about as received, fluid flow-thru. 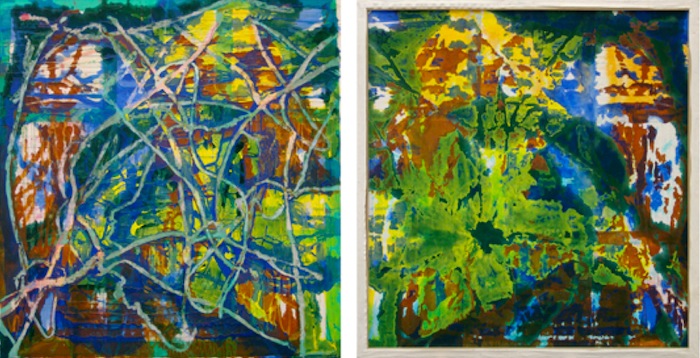 March Hare, front (left), back (right); Dona Nelson; 2014
Perhaps by ultimately being willing to follow where the cacáo takes Rogue, that very dynamic becomes this bar's flavor savior (that sweet fruit scree leading to the back / finish) without which it'd be another fine chocolate of formalized constraints. Those usually dead-end in banality.

Because of it, this Jamaica Bachelor Hall indulges obsessives in a Peter Dreher exercise who painted the same figure, within the same surrounding, from the same angle, every day for decades until he amassed a series of 5,000 prints, each deviating from the other only by the slightest change in light, a glimmering reflection, or a subtle line shift.

For them -- committed chocolatarians all -- the nuances & mysteries mount, resolve, then mount again. So they keep tasting over & over...

Conveys Rogue's Porcelana as much as any Jamaica. Hmmm… maybe mislabeled. Whatever it's called, a good bar nonetheless.