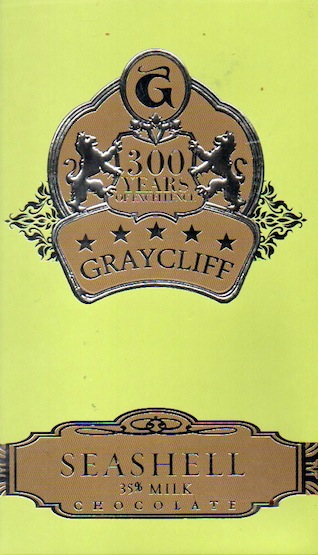 Impact
“Wild Chocolate” aka “Indian Chocolate” actually contains no chocolate at all. Instead it mixes up water, sugar, milk & the emetic bloodroot (which imbues the drink with its color to simulate chocolate).

From the looks of it, & early taste, this bar too appears to be chocolate-free.

Aroma   8.5 / 10
full-on cream & cream cheese (in line with the Color)
wheezes vanilla
Mouthfeel   12.8 / 15
Flavor   43.3 / 50
vanilla far heavier on the tongue than the nose: candy caramel -> candy corn -> rolls up vanilla lifted by salt... hugs this 'til hydrating toward bahri dates in cream -> exceptional cocoa-almond toffee stemwinder half-way down the shaft
Quality   16.6 / 20
Another beguiling bar from Graycliff's. If its Black Coral bar, advertised as a "70% Dark Chocolate" contains a drop of milk, then this MC amounts to a White Chocolate with virtually just a touch of cocoa mass.

The ingredients (see below) read practically inversely. And yet the last, & proportionately least, of the list sits at the bottom -- both literally & physically from where it punches up to deliver that sensational tail. Which attests less to this estate cacáo (Jamaica generally a delicate cultivar) & more to this barsmith's robust handling of it.

Skip the first 3 quarters (however sweet) & go in for that late savory turn into the homestretch… with a major finishing kick in the throat & the mouth.