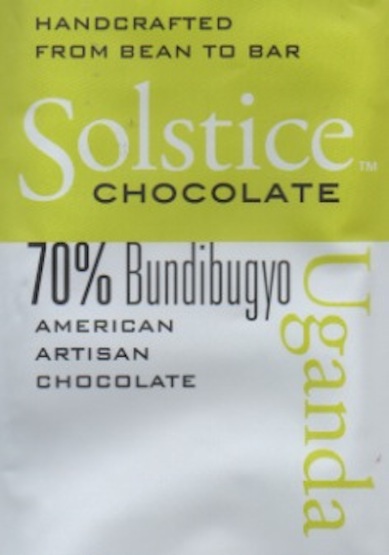 Impact
The few people to ever hear about Bundibugyo in the West associate it with the ebola-related virus.

Aroma   8.3 / 10
wild signature
landscaping the savannah & wetlands with cocoa tannins (shrubs, bushes, grasslands, mud holes)
baby wild boar roams thru (re: slightly hammy) + sweaty hippos wood-grilled over Kigelia pinnate (K. africana) aka ‘sausage tree’
hard cheese beneath (ala Canoabo… Solstice next to a dairy?)
Mouthfeel   12.4 / 15
Flavor   36.7 / 50
cocoa interlined with those topographic features in the Aroma -> brief cara-cara breaks the terrain -> rising bitter brings it back, including an iron post at the back ala pygeum derived from Prunus africana -> sap sweetener (to echo Blanxart's Congo) -> bee spit (dark forest honey) reconstitutes the earlier fruit as jujube -> fried motake (think starchy banana) -> cassava -> stringent clearing mimics unripe blackberry
Quality   13.4 / 20
Everyone expecting this to lay down the boom while wishing to be enraptured will be left with neither.

Just the second bar from Uganda (after Naive's) introduced on the int'l premium market & the first without salt & vanilla.

Bundibugyo… the leading cocoa producing district in the country… on the other side of the Rwenzori Mountains from where such bars as Zotter's Kongo & OB's Virunga originate. This tastes proximate to those, though of a rougher qualitative character.

Solstice strives valiantly to pull a chestnut out of the roaster & feels justifiably that this chocolate inheres some loveliness... just too little of it for most tastes.