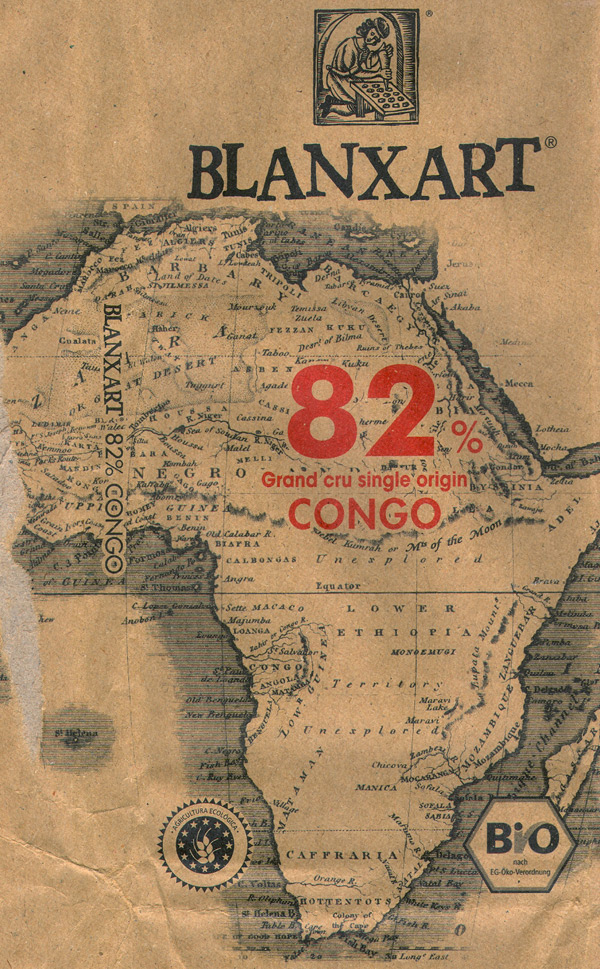 Impact
Gangster chocolate... from a corner that scares off even the hard stares of Styles / Jadakiss.

Clemens Fehr of Mountain of the Moon, from whom Blanxart sources this cacáo, operates in the extreme danger zone.

Right in the crosshairs of coltran mining country – that rare Earth crystal vital to consumer electronics from Apple iPads to Sony PlayStation to Boeing jet engines that refueled Congo’s Civil War -- giving it a 2nd wind in the spirit of blood diamonds.

That bad boy of cocoa, the notorious CDI (Côte d’Ivoire), a country of comparative stability, has, what, 25 checkpoints running the gauntlet from upcountry to the port of San Pedro. Imagine Congo then, when even good times (such as Mobutu’s era of the Ali-Foreman ‘rumble in the jungle’) required cigarettes & cash to pass thru every village organized around a fiefdom.

Here 7 year-olds without first names play with automatic firepower instead of toys, & address each by rank & serial number. The kind of place in which talk is very cheap & a life can be even cheaper – maybe the dollar it costs for a bullet. Replete with thugs who give a fuck, as in might rape their own mother if it comes to that by way of anonymity... that’s if the rival ethnic clan has yet to already get her. Witness the Kibibi trial in front of a mobile court that heard testimony from victims known only as 'Female 1' thru 'Female 49' to protect both their identity & safety.

Any philosopher of ethics could use this bar-exemplar to probe their students’ associations &/or idealized definitions of "the good" (as in Platonic ‘good’; Bentham's ‘greatest good for the greatest number’; John Stuart Mill 'common good'; or even the Marcus Aurelius notion of a 'good character').

A chocolate soldier of fortune, Clemens & his small band of mercenary cocoa brothers do whatever it takes / by any means necessary to mount a peace offensive, kissing rings & blowing kisses (if they must) instead of firing bullets.

This bar’s their payoff. Blanxart should do better than produce a rather closed stereotype of a knuckle-dragger with gorilla swagger.
Appearance   4.8 / 5

Sourced from the 500 or so member Le Jardin co-op in a 50x80 sq mile area around the foothills of Rwenzori Mountains, a granite-uplift range forming part of the Virunga Natl Park whose forests, among others, are home to rare Mountain Gorillas. A mild highland plateau with some slopes protected by a tree-density -- essentially an eco-niche rivaling Marañón Canyon Cacao -- which allows some cacáo to grow at an altitude of 4,500 feet in a place that once cultivated coffee until the commodity market collapsed on that – an instance of the ‘food of the gods’ replacing the devil’s cup.

On the micro level the genotypes sport slight diversity (as well as intercropping with vanilla) but taken as a whole it’s all rather homogenous on the macro level by the time Mountains of the Moon collects them into a central fermentary. There, beans ferment in their sweet-tart lychee-like pulp for up to 7 days, undegoing a 2/5 split (anaerobic / aerobic), 500 kilos at a time; first inside stainless steel tanks, then white plastic sacks (the latter comes thru some as varnish in the Taste). Initially sun-dried on purposely built racks; thereafter, due to relatively moist climatic conditions, moved indoors (& soon-to-be mobile greenhouses) where Mts of the Moon dries them in a flow of forced warm air to about 5% moisture – a bit on the parched side that contributes to the Snap characteristics.

A likewise mild cacáo (accentuated by unconscionable butter content) that nonetheless has a lot of boss in it -- a kind of distant relative to Rogue's Hispaniola with its bush-sauce thickness.

Given both the higher percentage & the processor approach (a strength level to fulfill Blanxart’s penchant for deep roasting), this as expected shows nowhere near even the subtle fruits noted in that other Congo (from the very same area) to come to market – Original Bean’s Virunga (actually made by Felchlin). Both, however, share the fat-gene to belie fabulously simple cocoa of surprisingly high-CQ (baseline cocoa flavor free of any nuances) & pop.

Still, an overly-manipulated bar that could & should be further developed. Cane sugar (probably raw) along with some sturdy vanilla (possibly locally-grown) animates those treacled offshoots that eventually predominate, to the detriment of this cacáo’s intrinsics (particularly the killjoy weighing down that sensational opening frame) as evidenced, again, by Original’s Bean’s version which omits vanilla & employs cleaner white sugar to deliver greater transparency.