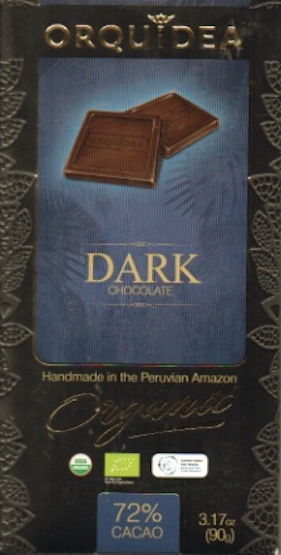 Aroma   6.5 / 10
plain shot
peanuts & sachi inchi
cocoa tannins around wood (palo santo)
thinly-sliced ham
Mouthfeel   13.1 / 15
Flavor   45 / 50
straight-talking chocolate with spice & flower surrounds (hydacheim, slippery elm & marshmallow root) -> cinchona (medicinal quinine) & pau d'arco (very tolerable) -> transitions to souring granadilla fruit which comes to predominate, though escorted by a sweet sap resin -> more herbal meds (this time including barks & twigs) -> the fruit huito (Genipa americana) + another... Amazon grape (Pourouma cecropiaefolia) with its parting wintergreen shot
Quality   16.3 / 20
At a trade show the Orquidea rep, one of the most ebullient of the entire event, Ms. Carla Cisneros Zuñiga sheepishly admitted -- after being assailed about the slag which generally becomes San Martin, Peru cacáo -- that the cocoa crafted into chocolate in this bar hails from the same area. She then went on to proclaim how the brand works with select groves, cultivating the smaller fruits of native cacáos, free & far as possible from foreign strains which act like so many invasive weeds (such as CCN). About 90 Bromans / growers in all, spread out among 3 distinct communities.

Right away the Color (a sign of either woeful under-ferment or more likely in this case light-to-white seeds) gives this away as some other breed. While the Aroma casts some doubts, Flavor proper dispels any & confirms her declaration.

No prissy strawberries or cupboard spices, this bar reps the Amazon, baby.

And though it hardly tastes uniform -- some aliens crept into the mix -- it largely resonates with the rainforest.

Orquidea obliges by letting this cacáo speak for itself at its own natural pitch without roasting or refining heavily, save for the inordinate cocoa butter further accentuated by lecithin which swells bulbous on the palate. The stated CBS (Cocoa mass / Butter / Sugar ratio) racks up a disbelieving ~2:5:5. That covers for some of the intrinsic flaws of the cacáo -- such as the medicinal edges / bitterness (hmmm, maybe they under-fermented & under-refined after all!?!?). Still the formulation holds together well enough.

A genuine taste of place.