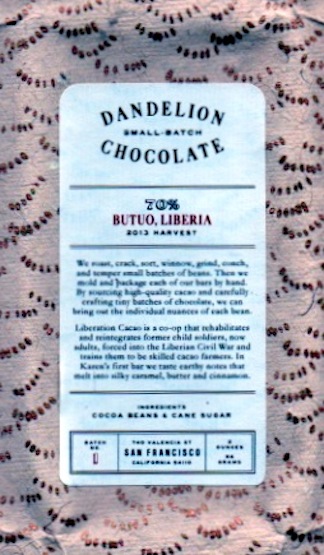 Impact
Redux Review: -- a bar first appraised in 2014 & then again in 2019. The overall rating refers to the updated session.
Overheard at Chocolate Revivals (aka conferences, shows, awards, et.al.) has been scuttlebutt about certain barsmiths flirting with exotic diseases in this New Age of Ebola (‘yo, bro, pssst, did you catch the latest bar from West Africa... smuggled in on a CDC flight… supposedly just kills it!?!?!?!? No, but as the yummifiers say, it's “chocolate to die for” OMYYYYYYYG’).

This site took the bullet for chocolate hounds everywhere by volunteering in the face of the risks to sample a bar containing cocoa from the epicenter of the epidemic: Liberia.

In the runup to this chocolate’s evaluation, with all the breaking news & hysteria surrounding the virus, everyone counseled that the bar should be appraoched with extreme caution.

Before even snapping it let alone popping it, several trusted advisors, including a staff physician, warned to “think carefully” & “make sure to get your affairs in order”. Additionally, one concerned colleague sent out a request to have a ghost writer draft the review based on notes from the session… just in case. Their response: “All ready if necessary. Indeed, I’m afraid I will have to.”

The dire forecasts & forebodings made it seem that this is tantamount to committing (sweet) suicide.

As the moment arrived, the Sensory Panel prepared to don a hazmat suit as the bar itself lay in a quarantined chamber, its pieces set to be ingested via a hermetically-sealed feeding tube. Further, established protocol called for ‘1 sniff, 1 bit, & then spit’.

Such a precaution is heresy to chocolatarians worldwide but under such circumstances these guidelines were thought commonsense.

Throwing caution to the wind, the intrepid impulse of true chocofiends said "F it… screw the space suits & let's bare-tongue this" for chocolate itself emboldens with courage to facedown adversity -- no matter how foolhardy.

Find out if anyone survived this act of mercy or whether the ghost-writer had to be engaged.
Appearance   3.7 / 5

2019
hits that middle-air of the Aromatics (above) & holds it... suspended... joined by cardamon / clove / kola spice pack -> thin caustic lining at the far tail
Quality   17 / 20
2014
MEDICAL UPDATE: 12 hours after sampling this bar, one panelist broke out in a cold sweat, apparently from unrelated causes. Their temperature is being monitored twice a day & reportedly is doing fine. Now back to the chocolate…

Perhaps the most monotone bar ever.

Nothing episodic; no parabola at all. So streamline & steadfast to be, pardon the pun, epidemic: cocoa in / cocoa out.

At such a relatively quiet amplitude & low magnitude too.

And, yet, positively lightyears ahead of the first Liberian to hit the premium market, that one during the pre-ebola outbreak. This by Dandelion, ironically, tastes far more wholesome & demonstrates that Atlantic / ECOM, the broker, exercised due diligence in its allotment selection.

Clearly some storage &/or transit issues but all-in-all a safe, comfort chocolate & a starter-bar for novices just at the beginning of the trailhead, whether as tasters or makers.

All that & glibness aside, a deadly serious situation has enveloped West Africa – the source for upwards of two-third of the world’s cocoa production. Liberia, a nation-state founded by freed American slaves, along with Sierra Leone & Guinea, bear the brunt of it. To paraphrase the great emancipator, Lincoln, fondly do we hope, fervently do we pray, that this mighty scourge may speedily pass away. Failure to contain it could have dire consequences for humanity, nevermind chocolate.

This is no time for schadenfreude like the myopic comments online about ‘fine chocolate is not made from bulk African cocoa’. While generally true, some of it is.

Let’s hope ebola does not impact Ivory Coast & Ghana – the bulkheads of the industry. Many farmhands who harvest cocoa in Ivory Coast are migrants from Liberia & Guinea. The gov’t of Ivory Coast sealed the border (odd, in light of the debate in North America over suspending flights from West Africa; apparently Ivorians profile & discriminate too) & those migrant workers now cannot cross (at least not legally) to pick cacáo pods. Should ebola affect Ivory Coast &/or Ghana, cocoa growers there would flee to avoid exposure to the virus. Their cacáo fruits — whose seeds are a key ingredient in every chocolate — would be left unpicked to rot.

Our thoughts are with all the professionals in the trade who travel & work in the region &, above all, the Africans who live there. May everyone be spared of the wrath of this wretched disease.

2019
Wow, what several years of aging if nothing else (such as a new harvest &/or different batch) can do for flavor development. Nothing unusual there -- Vintage Chocolate improves with time.

2 years beyond its 2017 expiration date + a couple more from its inception, this bar nicely settles into itself. Playful, friendly, sweet & kind. Generous too in stamina. Hey, maybe like probiotics populate the GI tract with healthy bacteria, perhaps something analogous happened here to the guts of this bar.

Both the chocolate & the country are better off for being patient.