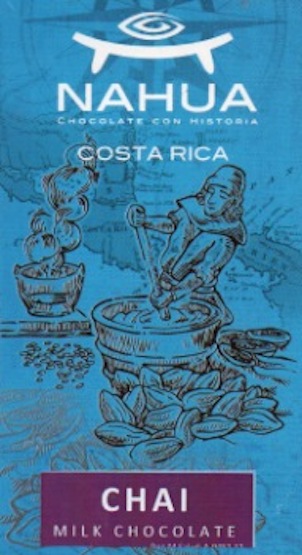 One fought for human equality. The other stands for equanimity of mind, body & spirit. And the 3rd an equatorial magnet that launched ships from the other side of the globe which Columbused the New World enroute.

In a world of severe disparities & discrepancies, the first sits pretty much dead. The second requires discipline & practice at a time when most have precious little of either, or even time itself, now that society has gone techno-manic.

That leaves chai – highly attainable… the revolution for the masses. Cha-cha. Ciao.
Appearance   3.8 / 5

Platforms on the base material of Nahua's vanilla-driven Milk Chocolate. But Milk Chocolate merely a delivery vehicle here & mostly occluded at that by a bevy of ---

True to its advertising, Nahua means 'chai' when it reads 'chai'.