Impact
Aretha may be Queen but this is the one & only White-Souled Goddess... Icoa*. Springs of pure milk whiter than snow flowing thru streams & honey dripping from hives... the nectar of bees, liquid gold in the sunlight – white cacáo. As ancient Egyptians practiced, the dead can drink the smell of it. Song of Songs / Song of Solomon is a tribute to Astarte &, by extension, Icoa - her New World incarnation. As from that Bibilical land of milk & honey, plain & simple, as in the beginning the ending - ouroboros style - with fleeting deep chocolate cognates. So powerful in its own right it can make some dark chocolates its bitch, or as Prof. Steve Almond believes, maybe butter is the high point of Western culinary achievement afterall. 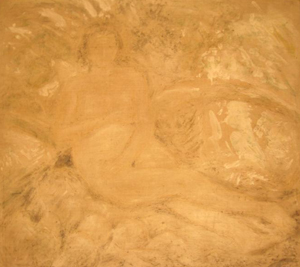 Woman of the River, Armando Reverón (1939)
[*Christened by Marìcel Presilla, adored by American aborigines because of her beauty, purity, & spirituality; perished crossing Lake Maracaibo enroute to marrying a chieftain, thus became protector of river & lake travelers. (Those raised on waterways know how placid, then tempestuous, they can be.) Harkens to the Mesoamerican myth of the Tall Girl conceived under a cacáo tree to embody water in a lake functioning as the navel of the world which the rain gods - called Chacs - drink & carry to the skies & eventually return to the fields in the form of her tears.]
Appearance   5 / 5

In the White World there’s Icoa Cacáo... inviting even the most contemptuous Dark chocomane... & the rest of the pack stands back at a remote distant... far from view... with rare exceptions (Vestri’s Bianco).