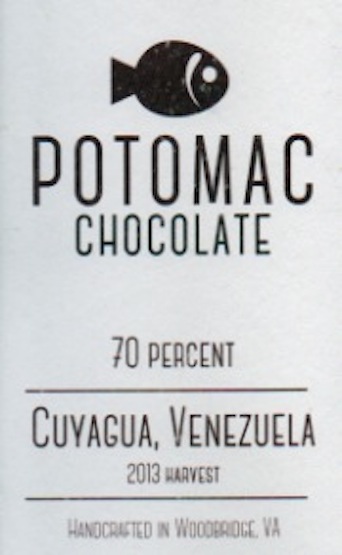 Impact
The legendary Hell’s Angels are lovable Californians next to the East Coast Sons of Satan-rolled-up-into-The Pagan’s (note the possessive of Pagan’s because... well, they’re possessive – of their colors, their Harleys, their drugs &, naturally, the women who desire to bang these bikers). Small & exclusive, they’ve hung on thru the years in the face of Federal investigations & rival turf wars. No sane person would ever want to cross The Pagan’s. They once took down the Angels & drove them out of Philly. Even the mob learned the painful way never again to ask The Pagan’s to pay a street tax.

The Mother Club or board of directors employs the services of professionals to provide a couple essentials for the gang which: a) fuel their rides with money & b) keeps them alert for hours on end. Drugs come to mind.

This chocolate, processed in the shadows of The Pagan’s territory (Virginia), might do the trick. It presents an origin (Cuyagua) & a barsmith (Potomac) rarely heard from, in an outlier interpretation of it. Bascially an outlaw bar.

Maybe The Pagan’s can become its distributor.
Appearance   3.3 / 5

Cuyagua's traditional chocolate note subsumed by licorice tags. Amazingly it stays true to the root however, unlike most licorice-tinged bars that deteriorate into molasses / mol-ashes. This maintains instead the sweetness & character of root (Glycyrrhiza glabra), as it strays from the traditional Cuyagua profile.

While Potomac goes easy on the roast, the label overdoes the refining, judging by both the Taste & Texture, though with relative immunity since the final outcome gratifies all but the most taste-blind.