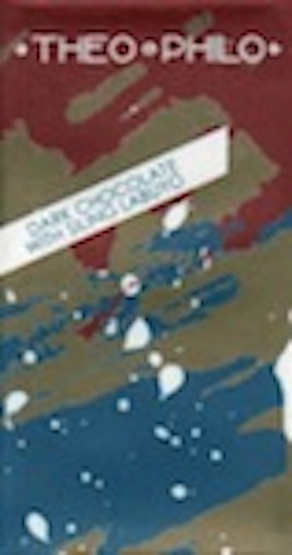 Impact
A couple pepper bars: the Dark to make anyone hot under the collar & a Milk to simmer with fervor for… well, like Filipino poet / physician / polymath José Rizal… for a little rebellion shy of revolutionar now that the overabundance of commodities threatens to drive farm prices down & trigger deflation which, economists warn, could imperil the "Great Recovery".

On the eve of his execution on grounds of sedition & whose martyrdom fueled the armed revolt he desperately sought to avoid thru non-violent resistance instead, Rizal retreated to his own talents, penning Mi último adiós

when my grave by all is no more remembered,
With neither cross nor stone to mark its place,
Let it be ploughed by man, with spade let it be scattered
And my ashes ere to nothingness are restored,
Let them turn to dust to cover thy earthly space.

Then it matters not that thou should forget me:
Thy atmosphere, thy skies, thy vales I'll sweep;
Vibrant and clear note to thy ears I shall be:
Aroma, light, hues, murmur, song, moanings deep,
Constantly repeating the essence of the faith I keep.

O, José, you'll always be remembered... even if over your grave cacáo trees grow some day.
Appearance   2.1 / 5

Aroma   7.7 / 10
Siling Labuyo
more like sweet red pepper or paprika than any hot one

Adobo Peppercorn
pepper jack cheese
Mouthfeel   10.2 / 15
Flavor   41.4 / 50
Siling Labuyo
classic mainstream semisweet vanilla-chocolate -> pepper thru the rear vent of medium-hi heat to obscure & burn the niceties of the preceding -> chocolate returns a charred shadow of itself &, oddly, the better for it

Adobo Peppercorn
drops in trad Milk Choc but cut here into a salt mine (thanks to soy sauce) -> late-breaking & very tempered pepper
Quality   13.8 / 20
Siling Labuyo
65% cacáo-content; Lot No. F14D65F1
Too hot to many but leaves a good warm spice character beside a burn mark in the chocolate to prove satisfying.
INGREDIENTS: cocoa mass, sugar, cocoa butter, vanilla, chili pepper