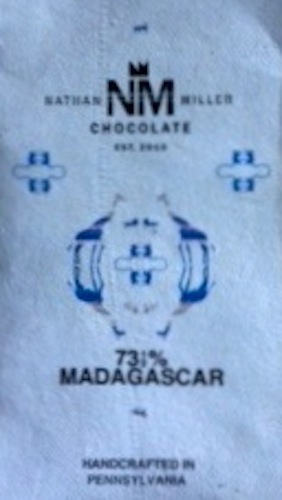 Impact
Perhaps the second challenge for any barsmith to master beyond chocolate-making is branding. Who are you?, as a brand; or what's the brand's identity? How to make a statement that sets one apart in the marketplace…. from selected ingredients, to the mould, & packaging designs, & whether these elements cohere or confuse. For an artisan who simply wants to create great chocolate (which should suffice in-&-of-itself but that's not enough nowadays when consumers conflate 'stuff' with 'goods'), it sure complicates things.

Hence, well-financed startups pay big money to consultants, designers, & PR people. Lacking the funds or the knack in a field of now hundreds careening toward thousands of micro bean-to-bar mongers means never breaking out beyond a regional following, if not their own backyard.

Enter into the fray pastry-chef-turned-barsmith (a recurring career-change in this niche) Nathan Miller with this foray.

Miller founded his chocolate company in Chambersburg, PA. Whether unconsciously or not, his packaging evokes the area's feel & history similar to Brasstown in North Carolina. Chambersburg sat on the frontier then the frontline during the French & Indian War; later it became the only community north of the Mason-Dixon line to be burned by Confederates during the Civil War.

So Miller's wrappers resemble combed cotton chamois, perhaps like those worn in a bygone era. Rural aesthetic to anticipate a rustic bar delivered with all the quaintness of the Pennsylvania Dutch Amish in a horse 'n buggy carriage... which only proves an illusion supported solely by the organic ingredients, & not Miller's execution that is modestly modern.
Appearance   4.5 / 5

Nathan Miller achieves a modestly unique spin on a Madagascan seed that has witnessed more sprouts in the world of premium chocolate -- practically every barsmith with a shingle pumps one of these out -- than a chia house pet.