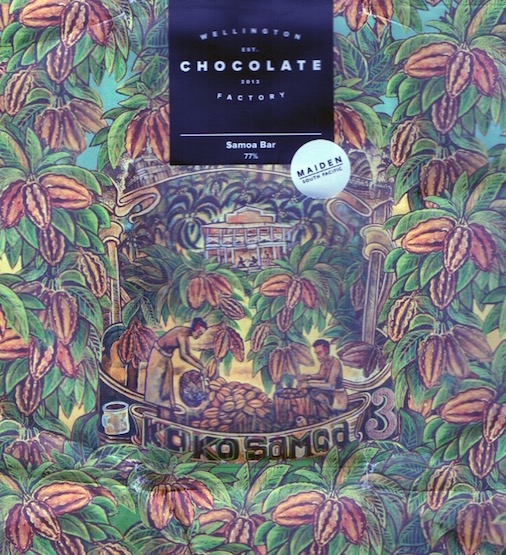 Impact
The Moeraki Boulders, sitting down the southeast coast to Wellington, form massive (up to 7 feet in diameter) spherical concretions (mineral lodes in embedded sedimentary rock) exposed by erosion from wave cuts along the ocean -- as if droppings of avian dinosaurs. Given their Paleocene origin... well, who knows.

These 4 bars share a similar gritty / sandy character (especially the Textures), several utilizing island cacáos washed up on the shore.... all perfectly apt for chocolate crafted in New Zealand. 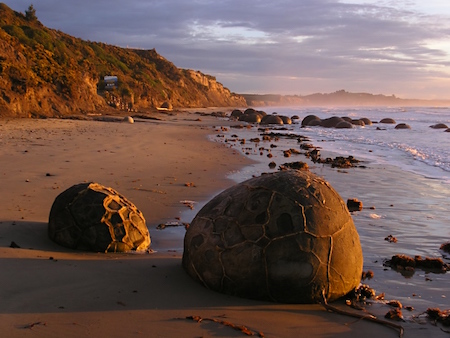 Top-heavy in an attractive manner with just enough bottom to prevent toppling over.

Samoa
orange-cinnamon on a dry bed of tannic cocoa, tannins on the bitter verge without ever developing into a caustic takedown (remarkable) -> brown sugar -> taro -> kava-malt close

So much aggreeance for 77%. A bar that threatens a bitter insurrection only to maintain its poise, malting away to the very end... long in coming... thanks to Samoa's renowned cocoa butter composition.

Simple at the outset; intricate by the finish.
Wellington has a knack for cinnamon & apricot tags in its bars it seems, despite some disparate origins (spanning from the South Pacific to the Caribbean on the other side of the globe). Maybe the seed selection, or the slightly browned turbinado sugar, or... something hanging in the air around the factory. Whatever the circumstance, a warm, enticing bar that defies its Aromatics like a dowdy dowager who turns somehow sexy under the hood.

Shades of Madagascar without the red-hued technicolor.
Quality   15.5 / 20
Wellington Chocolate.... voyaging & foraging nearby islands (& afar -- re: The D.R.).

Deserves the Mott Green Award for light zero-emission eco-footprint, sailing raw materials back to their NZ base under wind power(!!) (other than that, let's face it, the CLA of the cacáo / cocoa / chocolate industry taxes the environment substantially).

Overall serviceable chocolate in a country rather barren -- & therefore should be starving -- of the real deal.