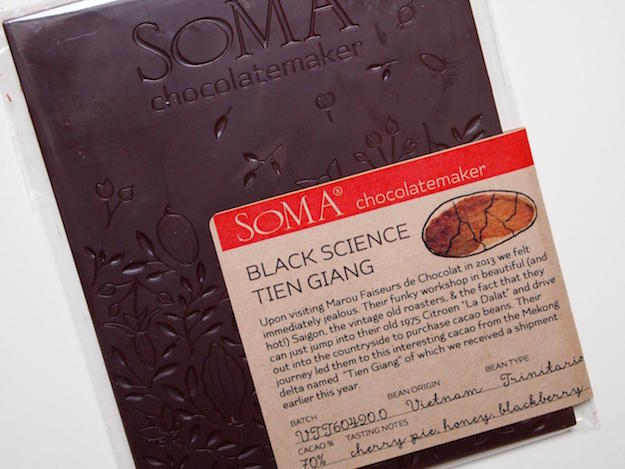 Impact
John Kelly -- friend of the C-spot™, civil engineer, part-time artist, & chocolate taster -- writes-in that he tossed out painted canvases not to his liking, including a piece now dubbed The Sniffer.

Years later while cleaning out his mother's home right after her death last summer, he discovered that she quietly pulled & stored it in the basement. Obviously the insightful mother saw treasure in her impetuous son's trash.

Good thing too. For it captures the perfect image -- beatific really -- of how this bar performs on the senses. 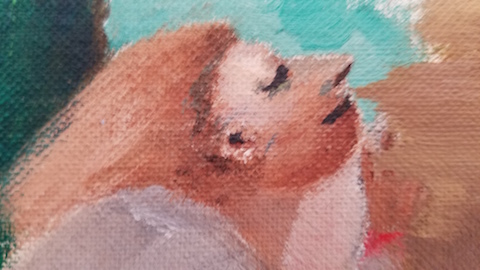 Aroma   9.1 / 10
a muskateer
those heady only-from-Vietnam intoxicants... loading on musks & middle notes
Mouthfeel   12.8 / 15
Flavor   46 / 50
chocolate hash oozing / 'oud'ing out a censer filled with other exotic spices & fragrances... cut by talc, naturally, as any smart dealer prep in order to avoid overdosing the customer -> sweet myrrh (terrific!) -> brown rice syrup cake! -> trippy magic fig & tamarind -> black cherry pie
Quality   17.7 / 20
The liner notes fail to do justice (ditto just about all takes on this type) -- the standard conventional markers to spare anyone from being too far jolted & thus back away from the buy.

No worries, Soma does justice to the matter at hand by respecting the seed / bean (or is it a nut? whatever).

A chocolate that elicits 'oohhs' & 'aahhs', moans 'n groans to twist the id inside out.

First brought to the world's attention by Marou's 80% cut in 2012 which remains the definitive version. Make no mistake though: this follows suit in fine form... like the laws of correspondence & sympathetic resonance -- where that gongs, this vibrates.... with after-tremors notwithstanding the buoyant play on the palate compared to others' renditions. More sugar & cocoa butter account for some of that buoyancy + Soma’s considerable equipment works the compounds more thoroughly than the average set-up.