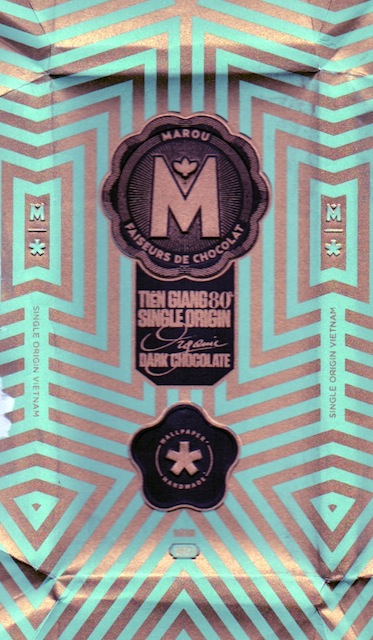 Impact
This the big sib to Marou's opiate Tiền Giang 70%. The review for that bar generated emails to the C-spot® about how preposterous to liken a chocolate to a narcotic.

Subsequent to that review, science came to the aid with an explanation.

An article in Current Biology details the research conducted at the University of Michigan which found that a natural chemical in the brain called enkephalin is stimulated & then surges when test subjects were fed chocolate.

According to bio-psychologist Alexandra DiFeliceantonio, the effects of enkephalin, an endorphin, mimic heroin!

File that under 'told ya so'.

At 10% greater strength, this bar registers an even heavier response, so effective to become "forgettable"... as in the 1960s (if you can remember the '60s, you weren't there).

Aroma   9.5 / 10
enough fragrant resin & exotic wood to build a spice cabinet (for both gustatory & apothecary purposes)
Mouthfeel   13.3 / 15
Flavor   44.1 / 50
fuming frankincense vaporizes core chocolate -> dark bark of oud from agar wood verging on bitter but never ever angered to become so; instead myrrh & sandalwood take over the censer -> florals follow (hibiscus + rose mallow ambrette) -> then another wave of spice... the intensely perfumed white champaca hits in a full body slam knock-out -> toasted chicory nut -> minute chemical terpenes create a slight pucker to limn perception back toward consciousness -> softer sandalwood caps it off
Quality   17.4 / 20
Even stickier / more resinous, if possible, than Tiên Giang 70% for a slightly medicinal / ceremonial chocolate rather than strictly an alimentary one.

Very sequential too; one impression right after the other.... again & again... on & on.

Obviously less sugar but proportionally a drop more cocoa butter to hem the flavor flags. A judicious choice lest this cause an irreversible coma of the senses.

Certain cocoa-gurus swoon at the merest scent of flowers in chocolate even as the rest of the bar struts up a tannic prick. This is that but a whole lot more (without the jagged edges) & far better cohesion. Shy of perfect harmony to be sure, the bar can nonetheless stake a major claim. Simply put, there's no chocolate on Earth quite like it. None. Nowhere.

Whereas severe hybridization narrows the genetic base of cacáo types & standardized fertilizers narrow the gaps between terroirs, so that depending on circumstance soured Peru might fool of a citric Madagascar to obscure distinctions from some feral Brazilian echoed in the islands off West Africa then further blurred by hodge-pods in Hawai'i that inflect Ecuador's Arriba Nacional to easily confuse nearby Esmeraldas & Guasare & Porcelana - admittedly that's a mouthful & It's all so damn dizzy -- there's only one Tiên Giang.... the deep gong of all of chocolate.

And with wallpaper-quality wrapper to suit (embossed no less like an evening dress) to give Mast Bros. a run for their money. Check that, it embarrasses them, makes their stuff tattered rags by comparison.

Neither S-B's Ben Tre nor Grand-Place's couverture & the candy giants single-origin blends, but it's Marou that owns Vietnam.