The guy goes so native & naked that he probably travels in the same circles as Annie Sprinkle & Elizabeth Stephens or at least carries their Ecosex Manifesto with him. Together they rebalance the ancient traditions which elevate the spiritual & sublime over the sensual & solid. The operative passages being (Editor's Notes parenthetically in italics):

I. We are the ecosexuals. The Earth is our lover. We are madly, passionately, & fiercely in love. In order to create a more mutual & sustainable relationship with the Earth, we collaborate with nature. We treat the Earth with kindness, respect & affection.

II. We make love with the Earth. We are aquaphiles, terraphiles, pyrophiles & aerophiles (dare say, chocophiles?!?!?!?!). We shamelessly hug trees, massage the Earth with our feet, & talk erotically to plants. We are skinny dippers, sun worshipers, & stargazers. We caress rocks, are pleasured by waterfalls, & admire the Earth’s curves often. We celebrate our E-spots (Hey, that rhymes with the C-spot®). We are very dirty. (Yep, chocolate, like sex, is a messy affair.... literally & figuratively a fucking grind.)

III. As consumers we aim to buy less. (For good reason -- while many think of premium chocolate as a 'less-for-more' scam, it actually equates to a qualitative 'more-for-less' bargain.) When we must, we buy green, organic, & local (ahhh, sorry chocolatarians, that bar violates just about every tenet of the locavore movement; just the facts, ma'am).

IV. We are ecosex activists. We will save the mountains, waters & skies by any means necessary (yo, you go Malcolm X, girls), especially through love, joy & our powers of seduction (right on / on ya feet / stand up / light up them iPhones / hands in the air / say it 'loud 'n proud'). We will stop the rape, abuse & poisoning of the Earth. We embrace the revolutionary tactics of art, music, poetry, humor, & sex. We work & play tirelessly for Earth justice & global peace. Bombs hurt (ouch).

V. Ecosexual is an identity. For some of us being ecosexual is our primary (sexual) identity, whereas for others it is not. Ecosexuals can be LGBTQI, heterosexual, asexual, &/or Other. (So many others -- we call 'em the "plus"). We invite & encourage ecosexuals to come out. We are everywhere. We are polymorphous & pollen-amorous. We hold these truths to be self evident (thank you, Tommy Jefferson, for holding a mirror up to the selfie): that we are all part of, not separate from, nature. Thus all sex is ecosex. (Screw the pursuit, happiness at last).

VI. The ecosex pledge. I promise to love, honor & cherish you Earth, until death brings us closer together forever. (Really? Amen! The ecosystem as sexy death-cult.) 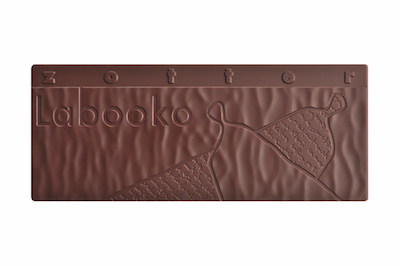 Laid back countenance & contour. Its red color a display of pedigree. Addition of cocoa butter almost superfluous unless Zotter aims for the etherealized heights which he strikes ever-so-softly in this shimmer of a chocolate.

Huallaga Nativo
75% cacáo-content
mild cocoa to the level of cocoa butter followed-on by an onslaught, a rush of heady spices to the brain... trip myrrh, frankincense, & out to fool of Viet Tiên Giang -> closes up on talc, perhaps the residue of Zotter's process which infuses the liquor with a shot of 'raw' cocoa

Wild & disorienting for a Peruvian cacáo

Alien if a bit intriguing for a Peruvian on account of this CCN foreign invader. Though it stands up well enough, nothing really stands out either. Perhaps just one reason Zotter sprinkles in a little extra sugar compared to the rest of the set.

Quinacho
75% cacao-content; Apurimac Valley
instantiates brief fruit crushed by those aromatic florals which bomb the chamber... long & strong... no let up thru the mid-interior cavity as well as length -> spell broken by a cinnamon tag -> semi-stringent grip

Evidently some 2-Heptanol compounds found in this cacáo which imparts a combined fruit / flower / spice impressions.
Quality   17.7 / 20
A few years back the Peruvian Minister of Agriculture sent the C-spot® a 108-page manual on the cacáo diversity flourishing within its boundaries. Despite introgression from outside genotypes (which raises concerns from a conservation perspective in a country that hardly needs any external inputs) plenty indigenous cacáos still abounds.

This collection from Zotter spans the north, south & central regions to re-affirm as much.