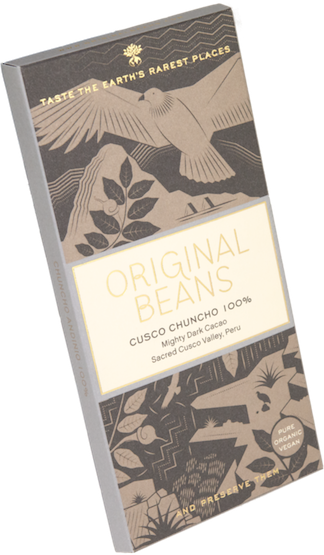 A bar that machos up, & comes with a testo load. Its single mission: seek & destroy.

So sit down when taking it or be prepared to take a standing 8-count upon getting up.

On what basis this bears the proud name of Chuncho remains about as hazy as the people nowadays themselves & the cacáo associated with them.

The safe play lists it as several varietals pooled together. The more daring claim it as a homoegeneous single-seed. Stéphane Bonnat wisely chose just to allay rumors by calling his bar simply Cusco. For more discussion on this topic, visit Shattell's Chuncho and Ucayali by Letterpress.

This bar here by Original Beans roams far from the friendliest 100 -- Chuncho or otherwise. But grows kinder with each successive nosh according to one's expanding threshold.

Beginners beware: a tonic for the jaded.