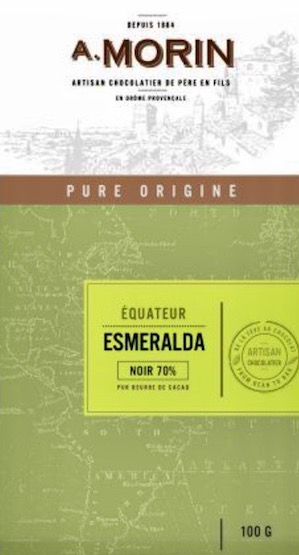 Impact
A couple repeats + 1 brand new origin for this French house which knows virtually no bounds.... neither geographically nor organoleptically.

The nube: Congo. A bar that delivers a taste therein. Far & away improved -- in all respects -- from a former Voyage au Congo...the one in which Andre Gide criticizes French businesses, particularly les régime des Grandes Concessions (i.e., a system whereby parts of the colony were parceled off to French companies to exploit all of that area's natural resources). Gide journaled how natives were forced to leave their village for several weeks to collect, among other things, rubber in the forest. His frank & honest account all in line with his declaration 'better to be hated for what you are than loved for what you're not'.

Lest anyone think this all only transpires sometime in the hazy past.... well, keep looking to places like Africa & Indonesian where social & environmental degradation continue apace. Ahhhh, plus ça change.... Hysterics who yammer the world today stands at the precipe of calamity & utter doom (God bless them) only need to heed that the book inspired reform at least & influenced anti-colonialism movements.

In his voyage to Congo, Morin provides cause for continued hope.
Appearance   3.4 / 5

Congo
duplicates the Aromatics & adds wondrous cherry-cola layer (far too sweet & plump for the 'blackcurrant' listed on the liner notes of the wrapper) that ends up dominating the profile from the midpoint on... until a clear & clean lemon underside
Quality   18 / 20
Pablino
Peru
A heavyweight with stamina

Franck Morin no stranger to Perú... he practically lives there in a chocolate sense with this the 10th from that origin. A vast improvement from the initial Pablino release in 2013.

Esmeralda
Ecuador
Quite quiet overall, as Esmeralda's wont. On the austere side for a 70%. Passages convey the likes of a very benign 80%. Somewhat a divergence from the fairy-tale princess of an Esemeralda with which Morin captivated the senses a few years ago &, yet, still all-alluring.

Congo
A new origin for a barsmith that spans the globe mightily to add to its ever-bulging collection. Absolutely terrific. Yes, quite sweet at just 63% cacáo-content. Nonetheless, Morin calibrates carefully to knock this out of the African continent... as if a 70% bar hailing from the Caribbean!
Lush.