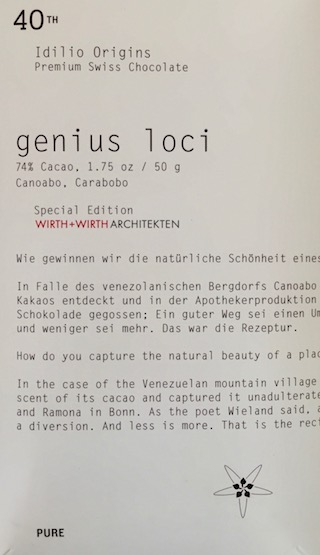 Impact
At the dawn of the age of aging chocolate, let's take a brief look-back thru a rearview mirror titled The First Geniuses which begins

It is so early almost nothing has happened.
Agriculture is an unplanted seed.
Music & the felt hat are thousands of years away.
The sail & the astrolabe, not even specks on the horizon.
The window & scissors: inconceivable.

But even now before the orchestra of history
has had time to warm up, the first geniuses
have found one another & gathered into a thoughtful group.

Later on the piece ends very pointedly -- literally & metaphorically -- about how our geniuses back then knew nothing. Including...

... not even how to sharpen a stone to a deadly point.

To all the chocolate barsmiths who, in this era of mass shootings & homicides, toil to manufacture bars instead of bullets.
Appearance   4.6 / 5

In between add-in some human ingenuity... Sourced via Idilio Origins, that Swiss company specializing in Venezuelan cacáo. Then pressed into a limited edition production run by Georgia-Ramon to celebrate Idilio's architectural firm (jah, chocolate people are multi-talented like that).

Altogether they nail it, both in execution & expression. The result: simplicity itself (nuanced of course). Just the nicest offsets as complements (cream & creamed nuts) in a continuum of basal chocolate... & lots of it. Such a bountiful bar. A firehose really, minus the heat & pressure to re-define subtlety. Overpowering in its delicacy. Due in part perhaps to the rather balanced Barithmetic (re: Cocoa mass / Butter / Sugar ratio) of ~3:3:2.

Very purposeful. Of super-focused intent. A chocolate in which less = more. Basic formulation: (cocoa + sugar) x 1 year of aging rounds the contours, smoothed by the hands of time. In other words, lets the bean do the talking.