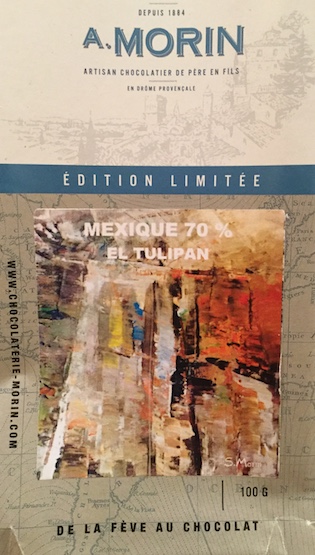 Impact
The Sochiapam Chinantec language in Mexico features whistled speech. It commands a central & highly valued loft in a culture where shouting is unheard of.

Mostly a ‘guy thing’, though understood by all. Men whistle for fun… even in situations when spoken word could easily suffice.

Franck Morin can articulate just about anything of renown from everywhere in the world when it comes to cacáo. His hi-craft spans the globe.

With this pair of Mexican-sourced bars, he whistles chocolate. Deep yet lofty.

They’ll have anyone who tastes them whistling too.
Appearance   4.2 / 5

... Except upon screening for this origin's low-rated versus high-rated bars (ala The C-spot Census™). Then taking into account the reports of esteemed ancient Mesoamerican chocolate. Jagged 'n ragged bars of modern Mexico represent the aberration rather than the true standard bearers. The change of misfortunes developed in the 20th century from gross hybridization in the growing fields, coupled with poor post-harvest management, plus even worse manufacturing. It all conspired to produce chocolate more akin to a prickly cactus plant than a cacáo tree.

These bars, along with the likes of Xoconuzco and Quetzalli, re-trace more authentic roots to this country's chocolate legacy. Largely Criollo in their DNA. Herein endowed with a varietal of growing renown -- Carmelo.

El Tulipan emanates terrific range, & all simpatico. Fruit, protein, fat, fiber, herb... basically a complete meal in a bar. Both the composure & magnitude on each of the flavor tags exquisitely high -- quite the rarity.

The finery in La Noria comes off as near-Veneuzuelan. Or more likely vice-versa since the genealogy of Venezuela's cacáo groves owe much to Central American transplants.

Mexico... moving forward by stepping back.