Impact
Stoned again by Amano's granite-grinder. Short progression, no real chocolate bang, but shoots a fine supple plume – constant & caressing – including a moment of sheer grace (at least in the inaugural edition of this bar).

This an assertive alpha-male while still being feminine, wild but accessible. No evil Darth Vader here, just darkest truths spoken by the Gods of Cacáo.

Amano’s a contender acquiring more heft as it grows out of its shorts. 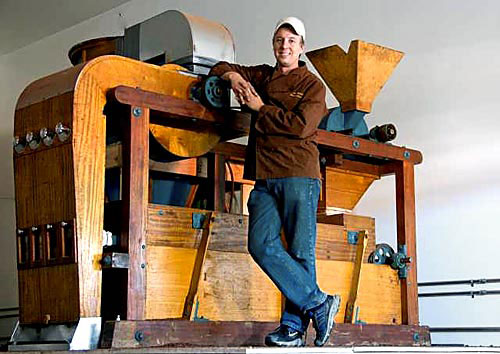 Amano y Mano - Art Pollard, the creative brain trust behind Amano Chocolate, stands in front of what appears to be an antique mahogany pipe-organ that in actuality plays a cacáo winnower to remove the husks or shells off the bean.
Appearance   3.6 / 5

That an example of an inaugural bar benefitting from beginner's luck compared to this the seasoned player. Axiomatic, if only sometimes of 'the more one knows, the less one grows' & at odds with an Amano that's generally learning & maturing? Or choc it up to vintage / batch variability?

In any event, far clearer & superior to that other Cuyagua from Choklat & much in league with Pralus' version.